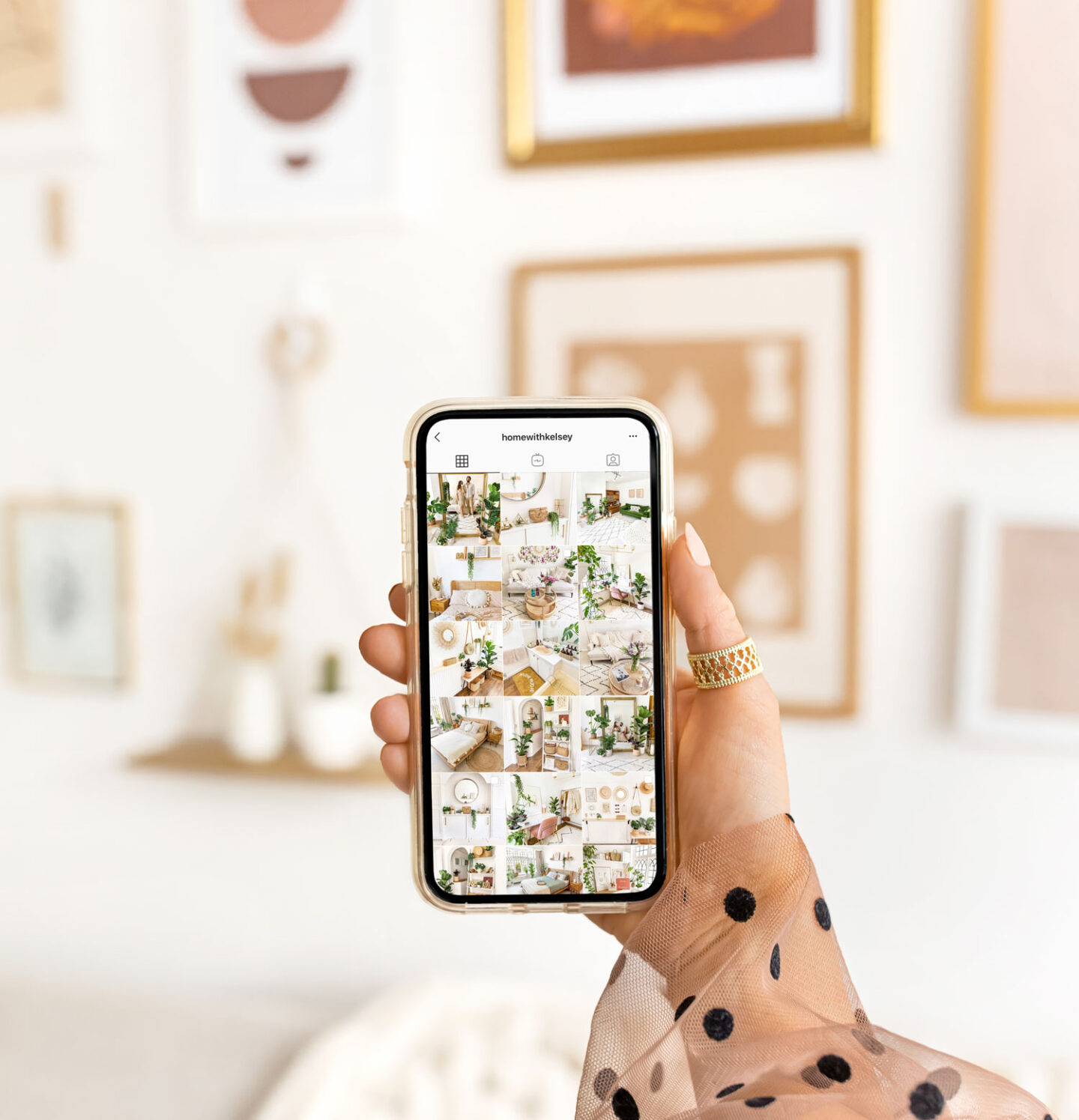 Like every other millennial, I used to use Instagram hashtags ironically. #Rawvegan on a photo of my Domino’s Pepperoni pizza or #nomakeup on a selfie where I very obviously had a buttload of slap on. To be honest, I previously thought hashtags were a Twitter-exclusive thing and didn’t give them the time of day.

That is until I did some research, developed a winning hashtag strategy and made hashtags my best friend. Since implementing my new strategy, I’ll receive anywhere between 10,000 up to nearly 200,000 reach per post from hashtags alone. 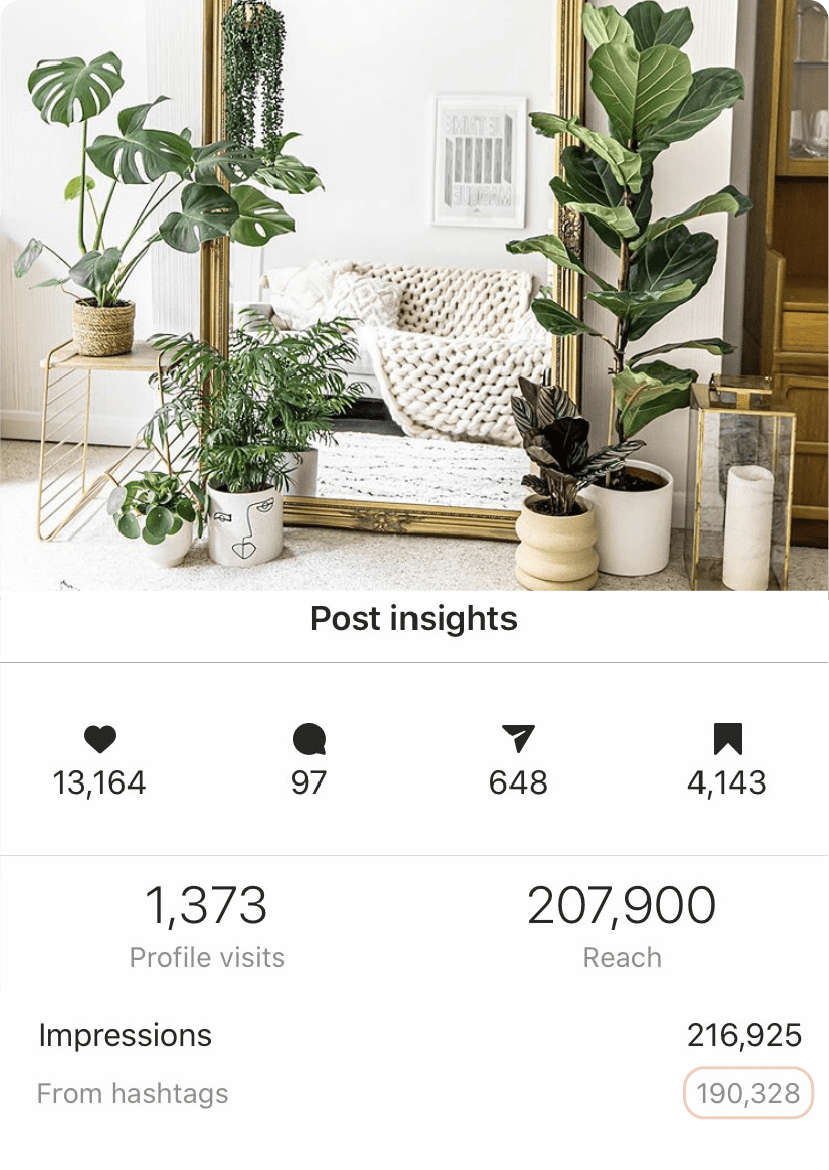 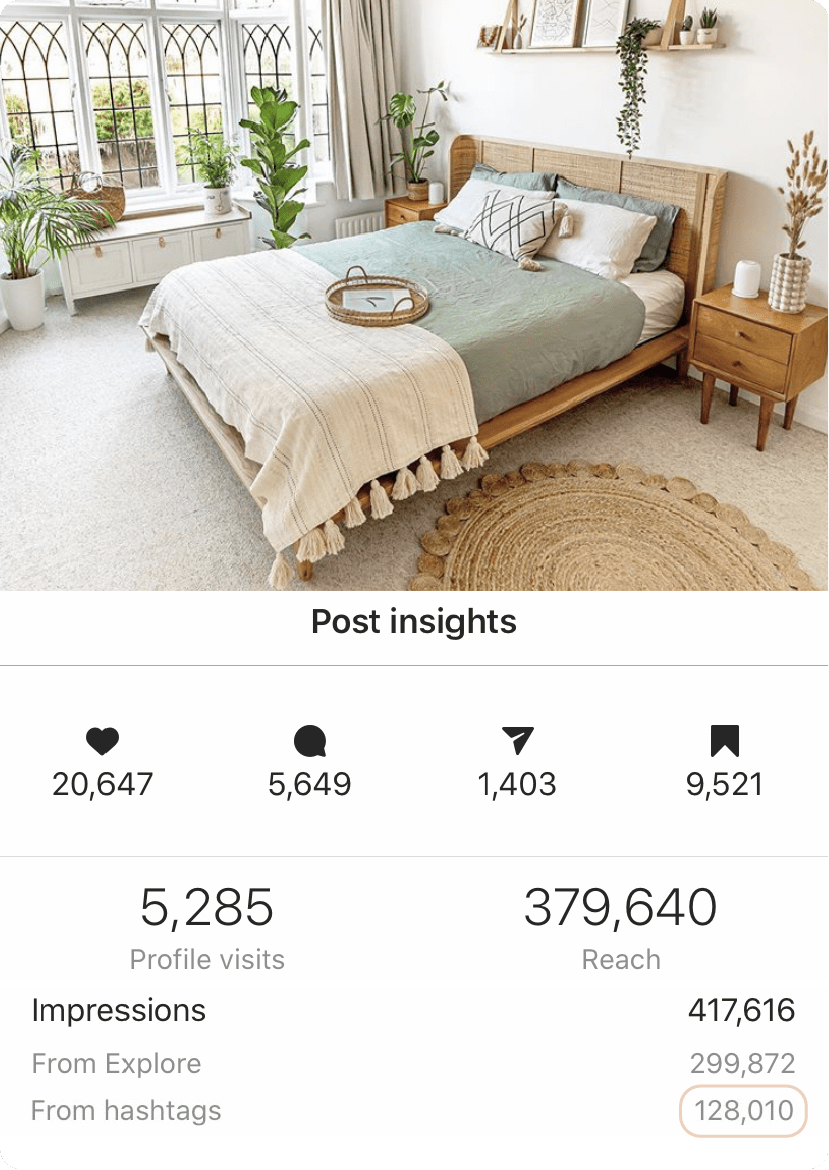 Instagram Hashtag reach is essential for gaining new followers as it’s the only way you’ll be able to organically reach people who don’t already follow without having to spend any money on boosting your posts. If you’re like me and would rather save your coin for Uber Eats, read on to discover everything you need to know about hashtags. No bullshit or rumours here.

1. What are the benefits of using hashtags?

Hashtags = reach. More reach = more likes and more chances to attract new followers, new customers and new opportunities. Even a new partner if you’re lucky! I attribute hashtags to one of the top strategies for growing my followers quickly on Instagram. You can read more about how I gained 10,000 followers (starting from 0) on Instagram in just under 6 months here.

2. How many hashtags should you use?

Always use 30 hashtags. 30 is the maximum amount of hashtags Instagram will let you use on any given upload. For ages, there have been rumours floating around that you should only stick to 3 or 5 hashtags because quality over quantity right? Well usually yes, but if you can use 30 quality hashtags rather than only 5, then you have 25 more hashtags working to help your post reach more people.

There was a study done that analysed over 65,000 posts and found that 9 hashtags were the ideal hashtag number for optimum post performance. What that study didn’t take into fact was the quality of each individual post comparatively. If your photo is shit, it’s never gonna perform well, hashtags or not. So this data is highly irrelevant unless you consider the actual content of each post.

Instagram won’t penalise you in any way for using all 30 hashtags. While Instagram is agreeably annoying, they’re not sadistic. Go for thirty.

3. What kind of hashtags should you use?

Use relevant hashtags that relate directly to your image.
It’s best to use whatever hashtags relate directly to the actual image you are uploading. Say you’re a fashion blogger yet you’re about to post a snap of your Sunday brunch, there’s no point using a bunch of fashion-related hashtags on a pic of your poached eggs. Users scrolling through #ootd aren’t going to bother engaging with your breakfast because that’s not what they’re there lurking in #ootd for. Instead, use hashtags that relate to your photo such as #brunchgoals and #eggfast.

Use community hashtags to connect with like-minded people.
These hashtags are a bit harder to come across however a good place to start is your location. Search for your city and see what relevant hashtags come up – ie #Bristolbloggers #BristolMum #BristolCreatives. Then think about your lifestyle, are you vegan or love DIY? There’s a community hashtag for that. Of course, there’s #CreativeGalGang which is a community hashtag I set up for my influencer support group – Creative Gal Gang. Members of my group can use this hashtag on their posts as a way to connect and support each other online.

4. Should you use popular hashtags?

Absolutely not. Avoid them like the plague. Popular hashtags like #coffee are way too generic and overused. Let’s not beat around the bush, there’s no way your post is going to be noticed in a sea of 126 MILLION uploads.

Try to avoid hashtags that are too niche as well. Avoid hashtags with less than 5000 posts as chances are not many people are actually looking at or following this hashtag which means you won’t get much additional reach from small hashtags.

Note: Please experiment with this as it really depends on the size of your account. If you are already seeing good results with hashtags, try to introduce some more popular hashtags (over 1 million posts) in the mix.

5. How can you find the best hashtags to use?

Let’s take the example of #coffee above. We already know to avoid using this hashtag as it’s oversaturated, so how do you find the best hashtags to use that are niche and relate directly to your flat white?

Simply head to Instagram, type in the most generic word that relates to your image, in this case ‘coffee‘, and scroll down the list of suggested hashtags and note which hashtags have less than 1 million posts. 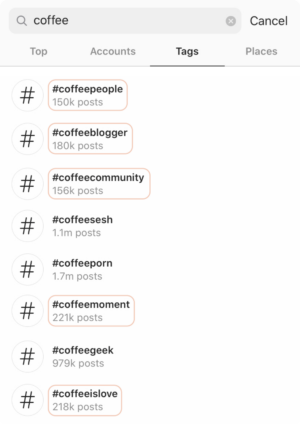 The second way to find more relevant hashtags is by looking on individual hashtag pages. From the example above, if you click on #coffeemoment hashtag, Instagram will show you a bunch of suggested related hashtags like below. 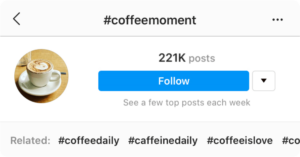 6. Should hashtags go in the caption or as a comment?

Always stick your hashtags in a separate comment below your post. This way your caption looks neat and uncluttered and focuses on your actual written content rather than a cluster of hashtag jargon.

If anyone tells you “oh but hashtags don’t work if you put them in a comment” — they are just spreading bullshit. It’s a false rumour, hashtags work perfectly fine in a comment so don’t let that fool you. If you prefer to stick them in a caption, you do you.

7. Why do hashtags work better on some photos but not others?

Because hashtag results can differ a lot even on similar photos. Even if you’ve done the hard work and researched 30 relevant hashtags, it still doesn’t mean you’re guaranteed to be hitting crazy reach and engagement on all your photos.

Say you’ve even uploaded two ‘similar’ photos of your nails with the same #nail relevant hashtag groups but one post went bank with hashtag reach but the other was a bit meh? Blame the photo, not the hashtags. Even though you may think the photos are similar (and as equally lovely), there might be one key difference that is essentially the secret ingredient to the success of that post. It may be something as simple as the colour of nail polish or even your lighting. 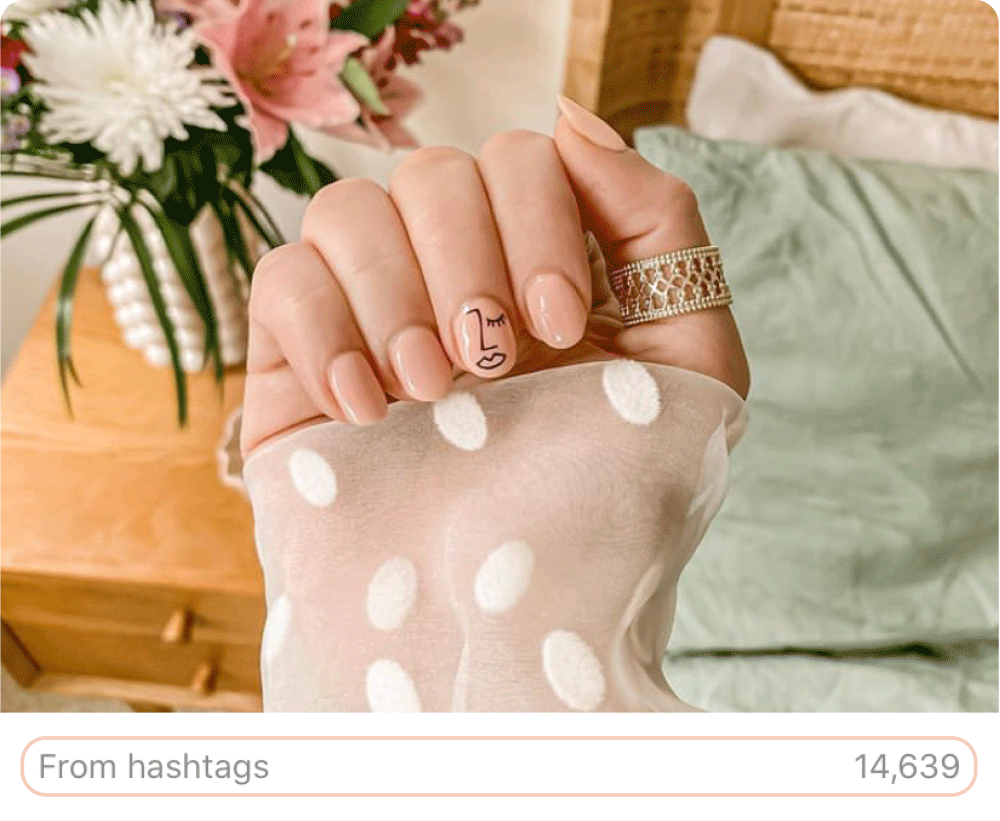 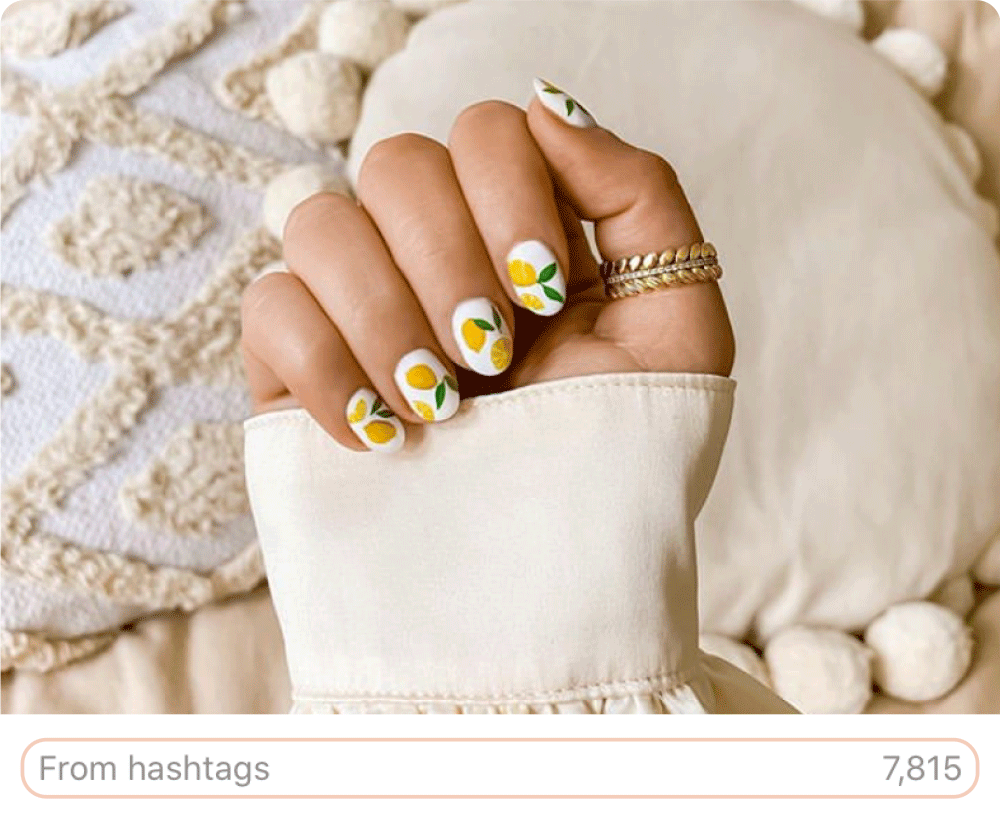 8. Do hashtags work on carousel / album posts or IGTV?

Yes, but only about 10% of the time. This is only something I discovered by chance earlier this year as I realised I was never getting any decent hashtag impressions on my carousel posts and yet my single image posts would get thousands in comparison. Speaking to fellow members of Creative Gal Gang – many influencers had a similar experience. The same goes for IGTV. If you look at the top page of any hashtag, you will notice that 90% of the posts are single-image posts, and only a select few are carousel posts or IGTVs. 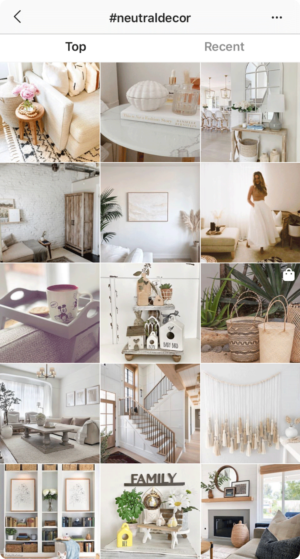 That doesn’t mean you should avoid posting carousels or IGTVs, it’s just that more often than not you won’t receive a decent amount of hashtag reach for them. You’ll still great engagement from your followers as carousels can be extremely valuable. Let me explain.

The below two posts both feature photos of my hallway. The first image is a single image post, 6k likes + 114 reach and 31k of that was from hashtag reach. From this post, I gained 417 new followers. The second post was a carousel post, it still received a similar amount of engagement & reach: 5k likes + 127k reach, however you’ll notice you can’t see any hashtag reach at all in my insights. From this post, I gained half as less new followers (234) as the single image post. 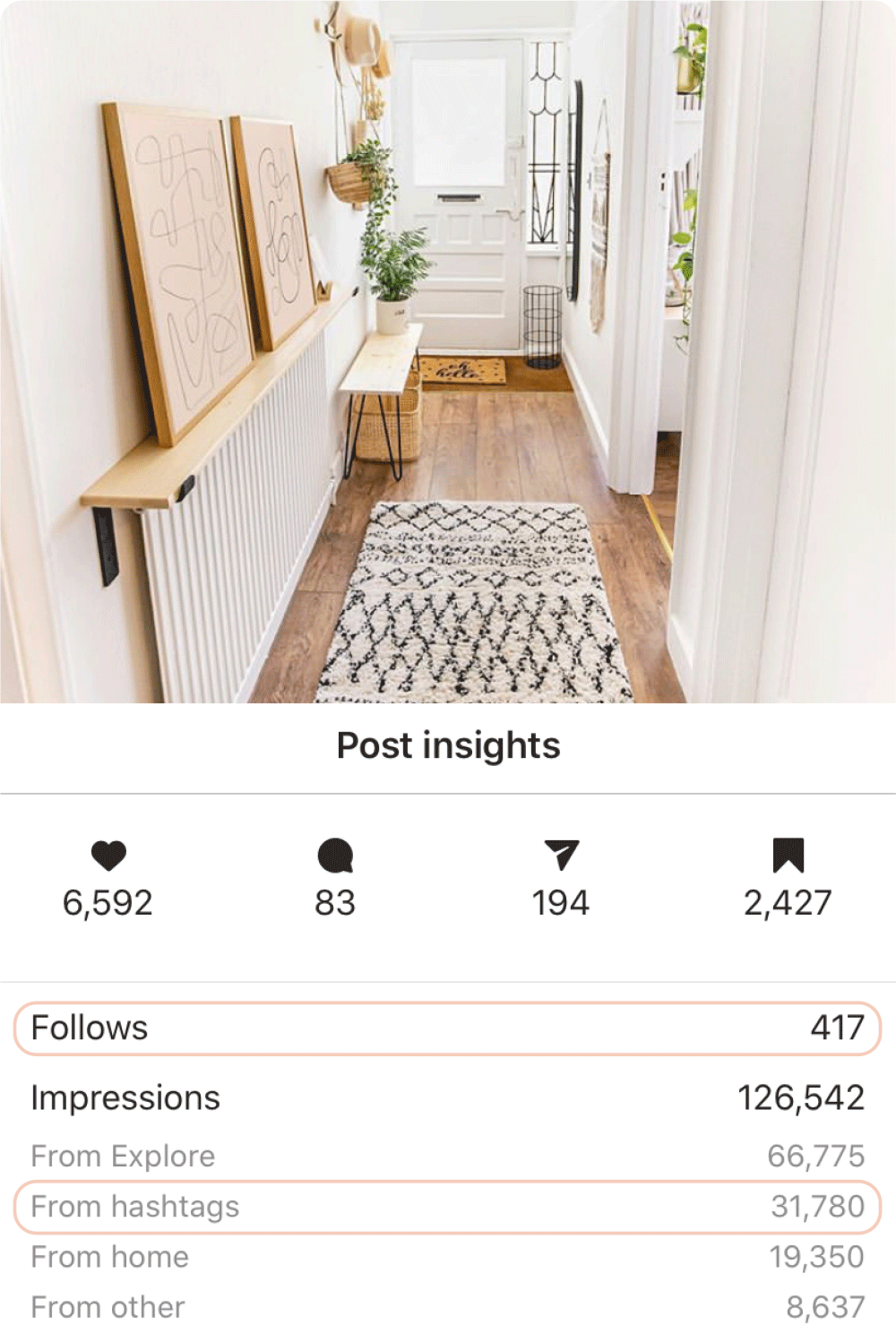 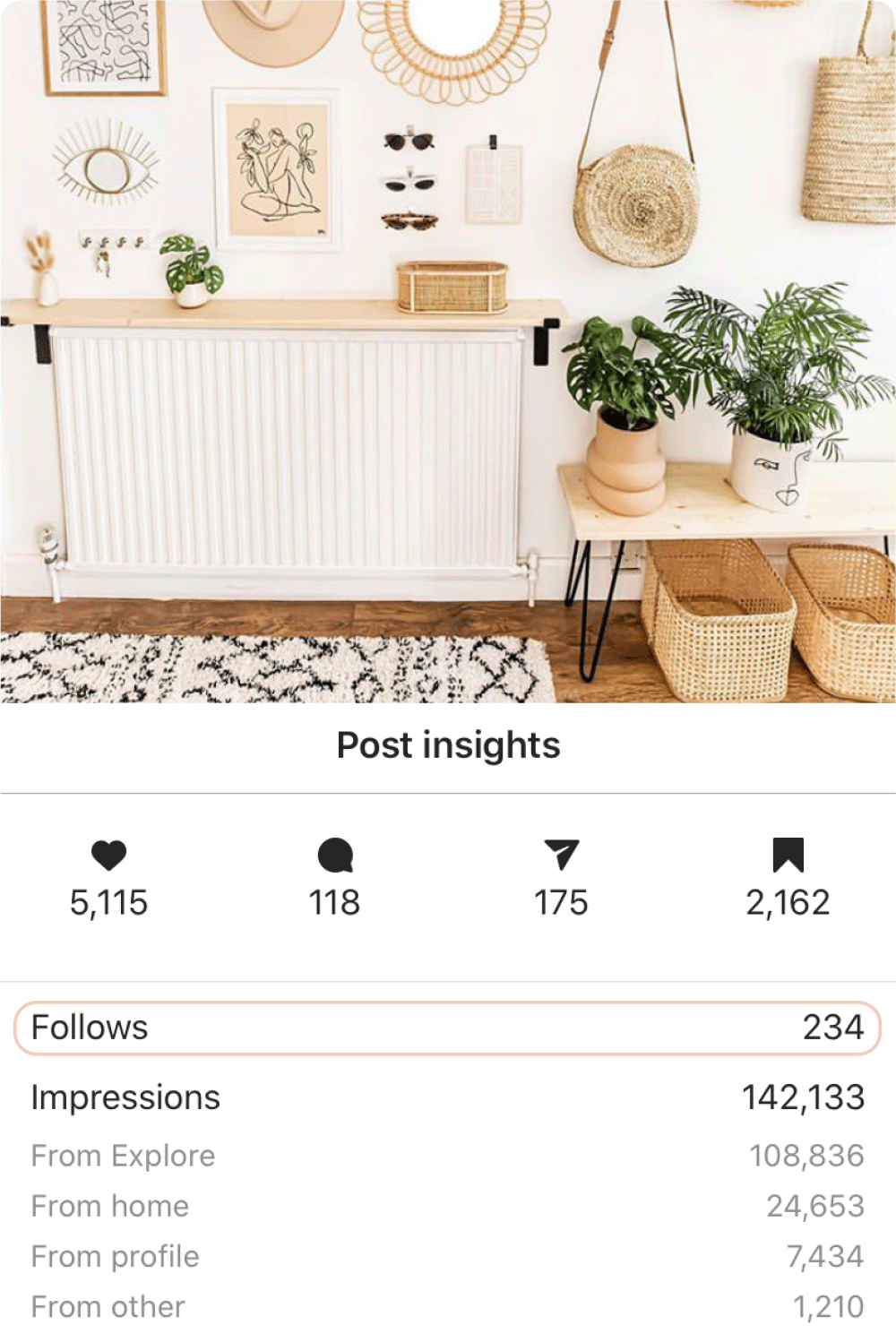 I’ll be honest and say I have no idea why Instagrams algorithm only lets 10% of carousel posts/IGTV get high hashtag reach. However, since this discovery, I started only posting single-image posts and as a result, I’ve been consistently receiving thousands of hashtag impressions on all posts and growing followers as a result.

What about the extra photos then? Save them for your stories! Mention in your feed caption that you’ve shared some outtakes or outfit close-ups on your stories. This will give your followers a good incentive to watch your stories.

9. What about banned hashtags?

Banned hashtags do exist. If you use a banned hashtag your posts will stop showing up in all hashtags and the explore page, which is what people often refer to as a “shadowban”. Instagram has officially confirmed this (read here).

You may think that you’re not using a banned hashtag, however, you’d be surprised at which hashtags are on Instagram’s naughty list. #Beautyblogger and #Bodyconfidence are both unsuspecting hashtags however they are banned by Instagram.

How to check what hashtags are banned? The easiest and most official way is to check on the Instagram app itself. Simply look up a hashtag in the search bar and Instagram will tell you if that hashtag is banned or not, like below: 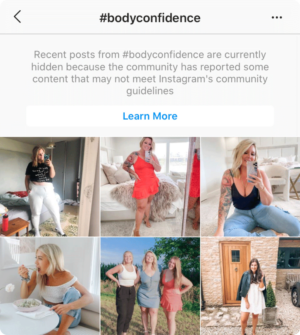 I love me a sassy bikini photo. To me, they ooze confidence. However, did you know that Instagram shadowbans bikini / lingerie photos? Yep, it’s true. I’ve had it happen to me multiple times, and so have many fellow Creative Gal Gang members. I’ve even had photos where I’m wearing fully clothed in a maxi dress however I received minuscule hashtag reach all because I’ve got a bit of cleavage out.

According to Instagram “While some posts on Instagram may not go against our Community Guidelines, they might not be appropriate for our global community, and we’ll limit those types of posts from being recommended on Explore and hashtag pages. For example, a sexually suggestive post will still appear in Feed if you follow the account that posts it, but this type of content may not appear for the broader community in Explore and hashtag pages.”

Here’s an example. The below two photos of mine are very similar in aesthetic, pose and style. However one photo I’ve got my cleavage out, no shame in that of course. I used the same hashtag group on both photos however one post received 12,000 hashtags impressions whereas the cleavage shot only received 43! 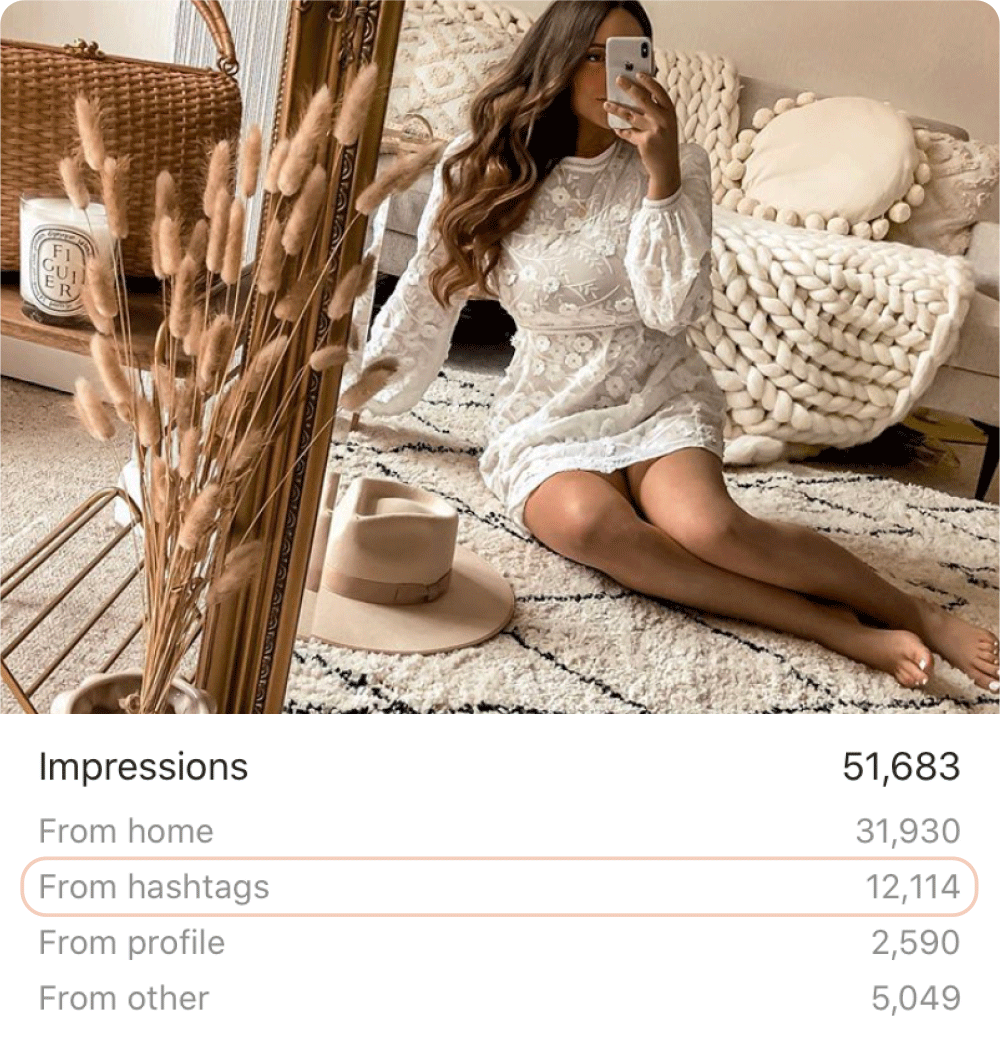 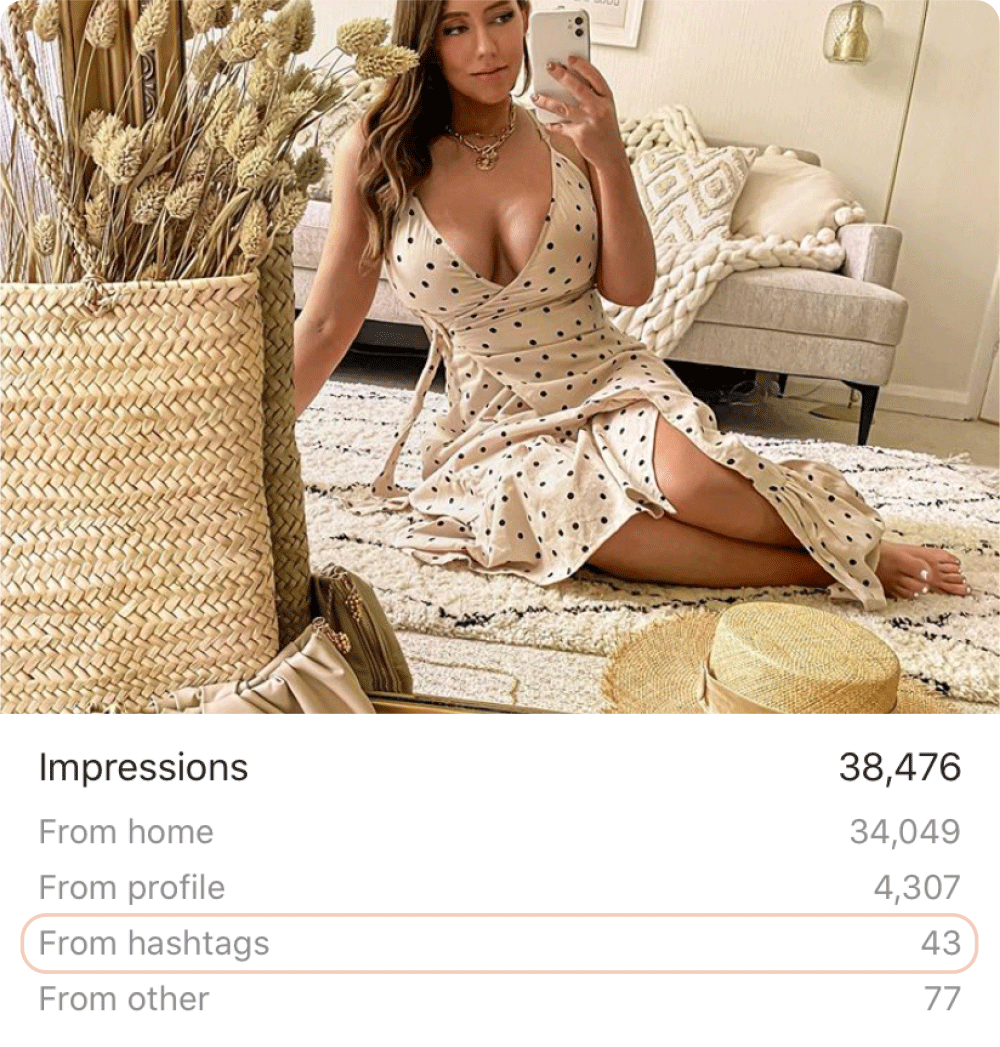 Final thoughts? Post the damn bikini photo!  You’re still likely to get a great amount of engagement from your followers who see the post anyway. Don’t let Instagram’s AI stop you from doing your thing.

I hope you learned something new about hashtags from my no bullshit guide. From implementing all the previously mentioned points in this blog post, I am now growing at a steady average rate of 10,000 new followers every month on @homewithkelsey with these Instagram hashtags strategy.

If you want help determining which hashtags will work best for your account, check out my Instagram coaching services HERE. I would love to help you achieve your Instagram goals! 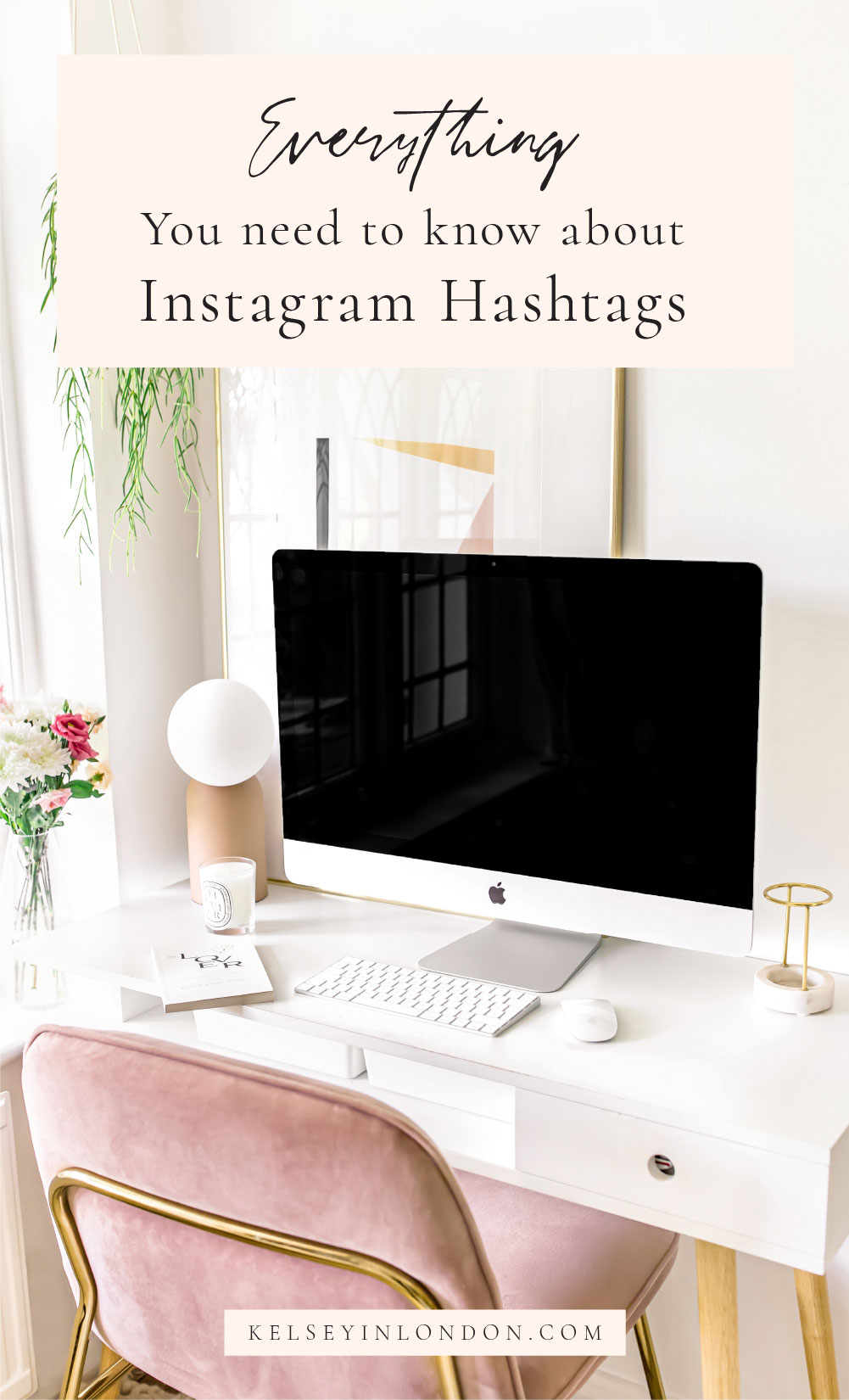 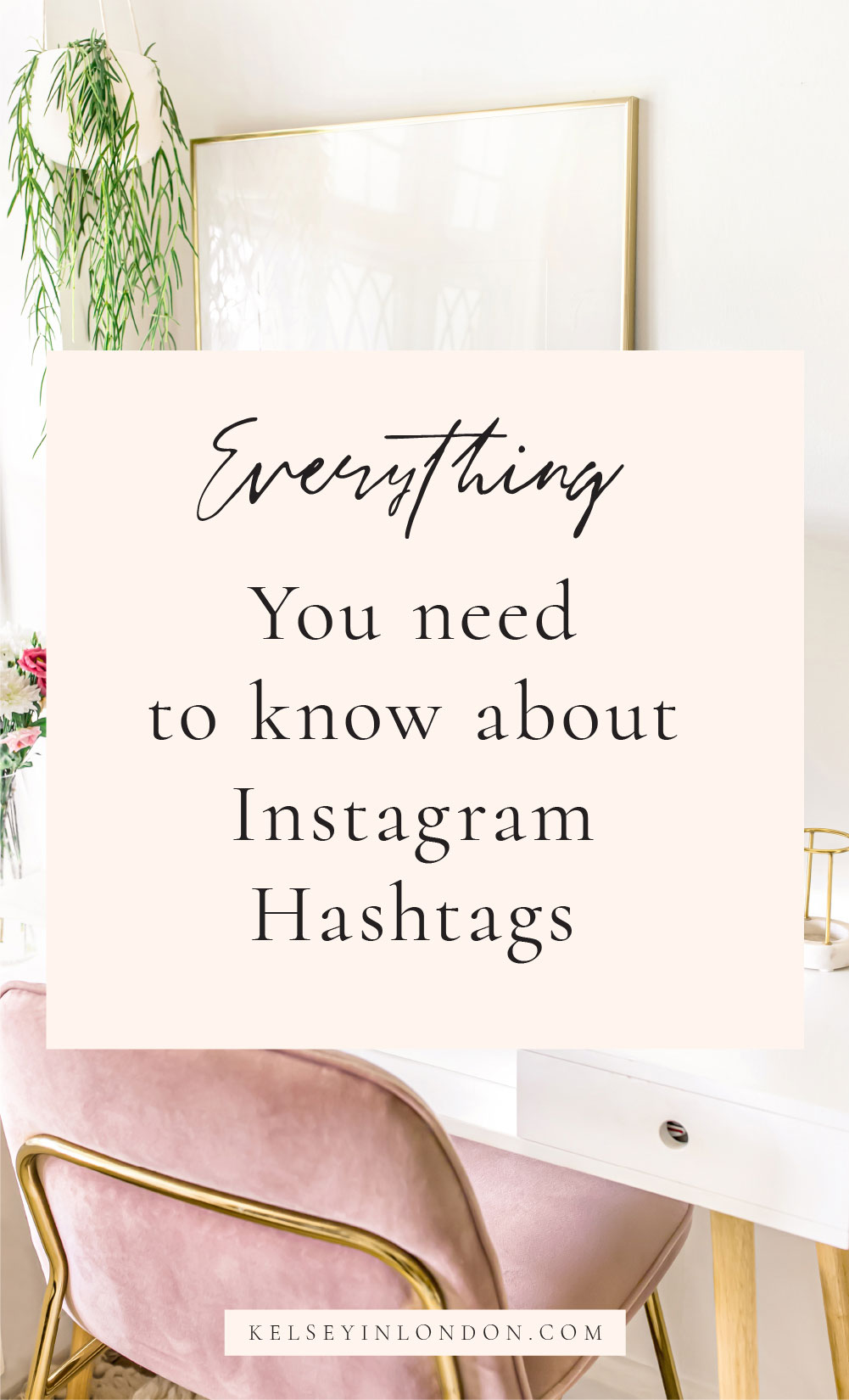 From zero to 10k in 6 months: How to get followers on Instagram organically.
How to Create the Perfect Gallery Wall 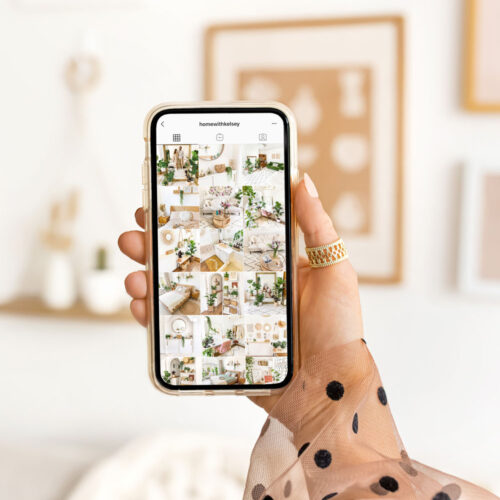 From zero to 10k in 6 months: How to get followers on Instagram organically. 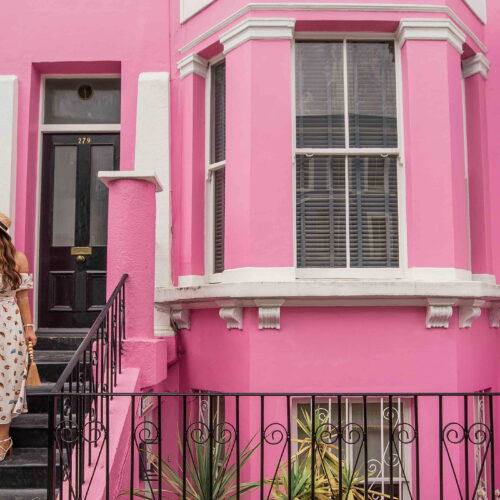 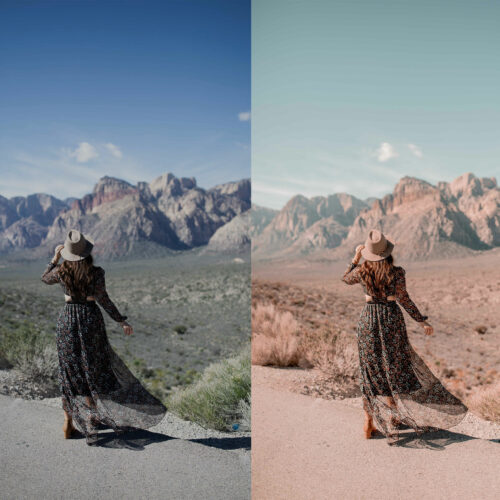 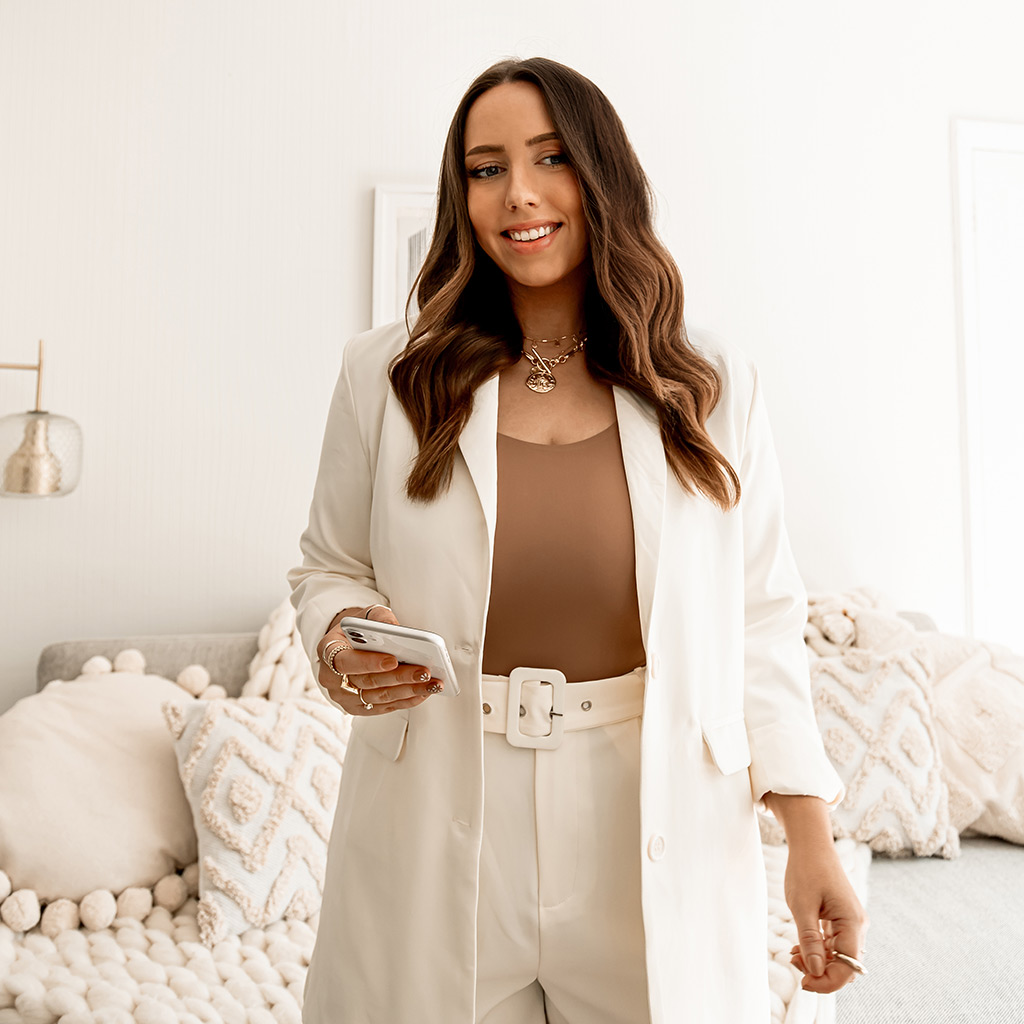 Hi, I'm Kelsey. I’m a London based creative and I love to document my adventures in the big city (and world!) as ‘Kelsey in London’.

Read more about me here

Transform your images in just 1-click with my presets (just think of them as Instagram filters – but MUCH better!). Use code 'BLOG' for a cheeky 10% off.

I hosted my first Clubhouse room last night all ab

I never know what to say whenever someone asks me

The only man (and person) in my lockdown life unle

Join my support group for badass gals in the creative + blogging industry. 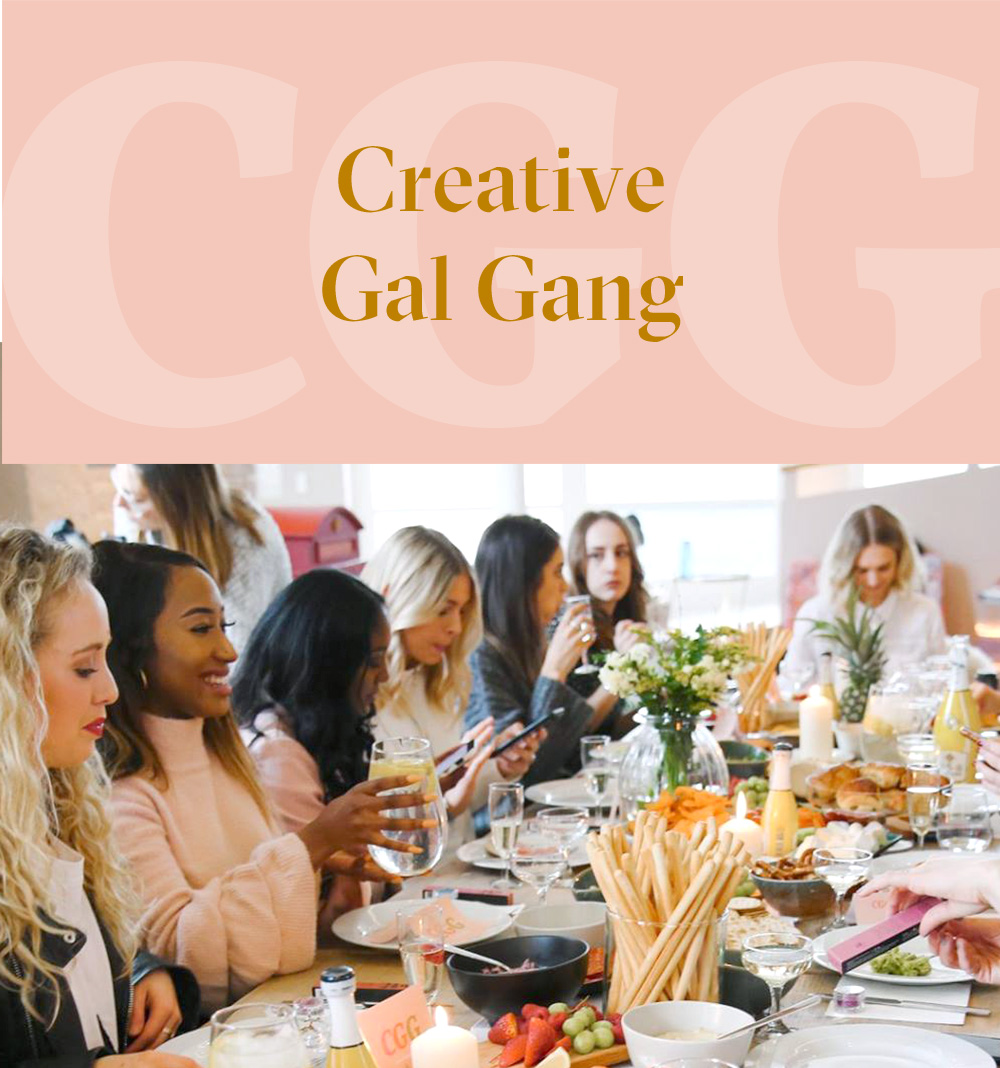