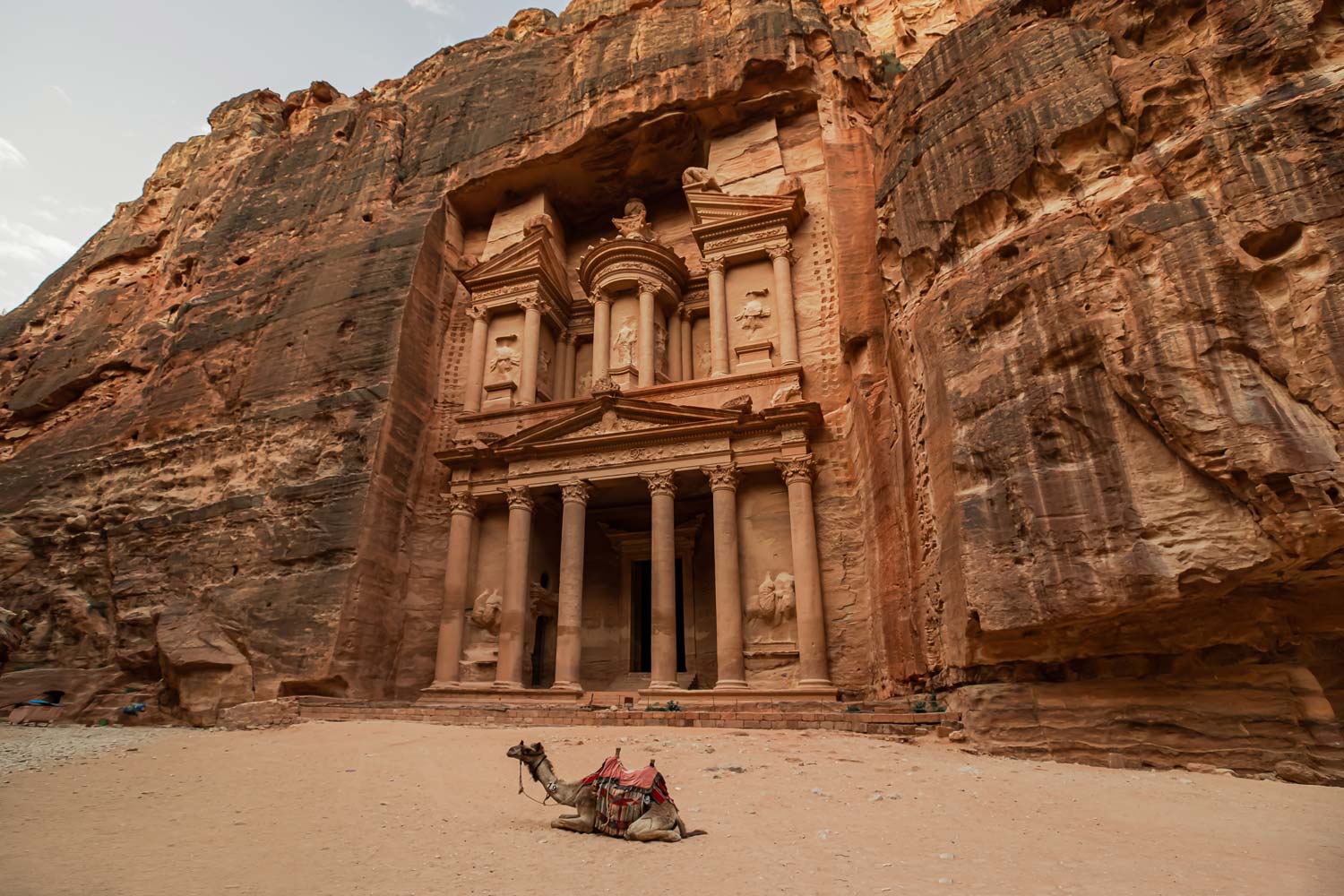 9 amazing things to do in Jordan

Ancient architecture & archaeological ruins, tranquil hot springs, unworldly desert landscapes, historic treasures, luxury beachside resorts, and home to one of the new Seven Wonders of the World. Jordan is a country unlike no other. Once an ancient trading centre, the hospitality of the Jordanian people has remained true for thousands of years.

Camp beneath the stars with the Bedouin, visit the lost city of Petra, float in the Dead Sea, and ride through the Mars-like Wadi Rum – there are plenty of things to do in Jordan. It’s the perfect destination for history buffs, thrill-seekers and those looking for some much-needed R&R. 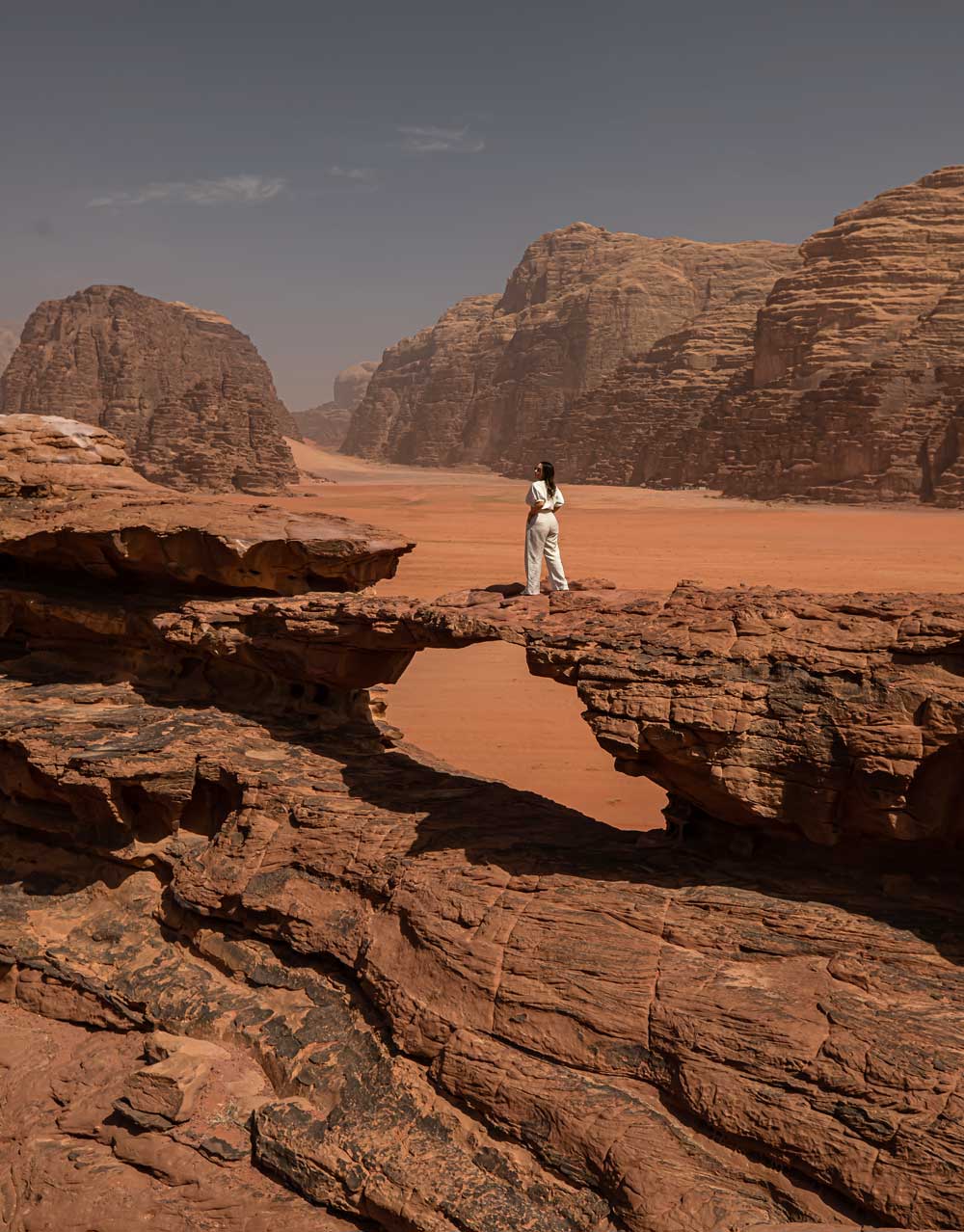 Top Things To Do in Jordan

In the south of Jordan, there is a vast desert landscape nicknamed the Valley of the Moon due to its unworldly appearance. Wadi Rum is covered in blood-red sand and abstract sandstone formations, giving it the arid appearance of Mars. It’s no surprise why it’s been used as a backdrop for various sci-fi films such as The Martian and Transformers.

Wadi Rum covers 74,200 hectares (about the size of New York) and is covered in 25,000 petroglyphs (rock carvings), making it one of the biggest open-air libraries filled with a history spanning thousands of years.

The best way to explore Wadi Rum is with a 4×4 jeep tour with the Bedouin as your guide. While these desert dwellers won’t be able to tell you much information as they don’t speak fluent English, they know the desert like the back of their hands.

Your guide will transport you to several sights of Wadi Rum including the remains of a Nabataean temple, a ruined fort called Lawrence’s Castle and several rock bridges where the sandstone has been eroded by winds, creating a tunnel through the track and leaving a natural bridge and epic viewpoint above. 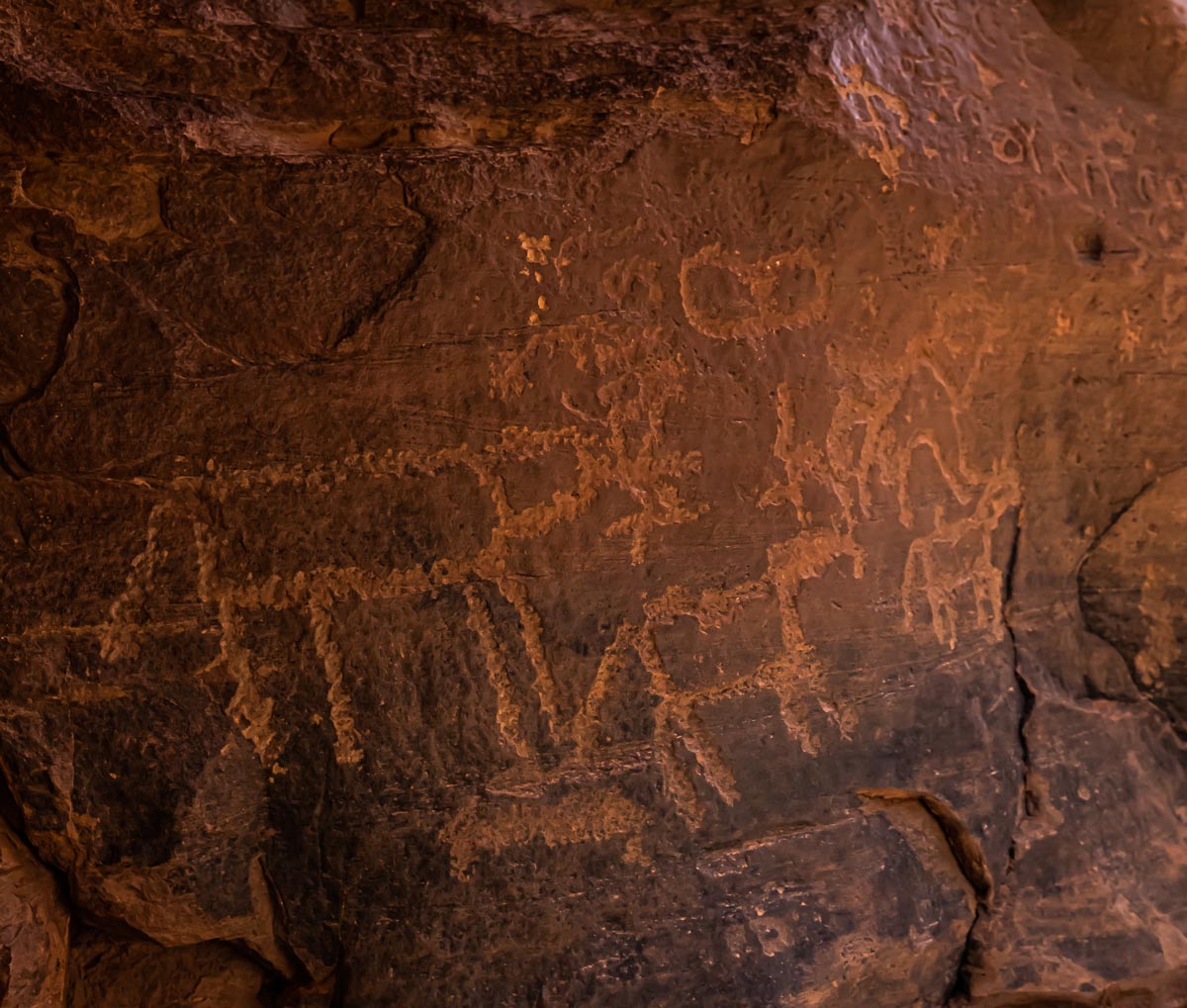 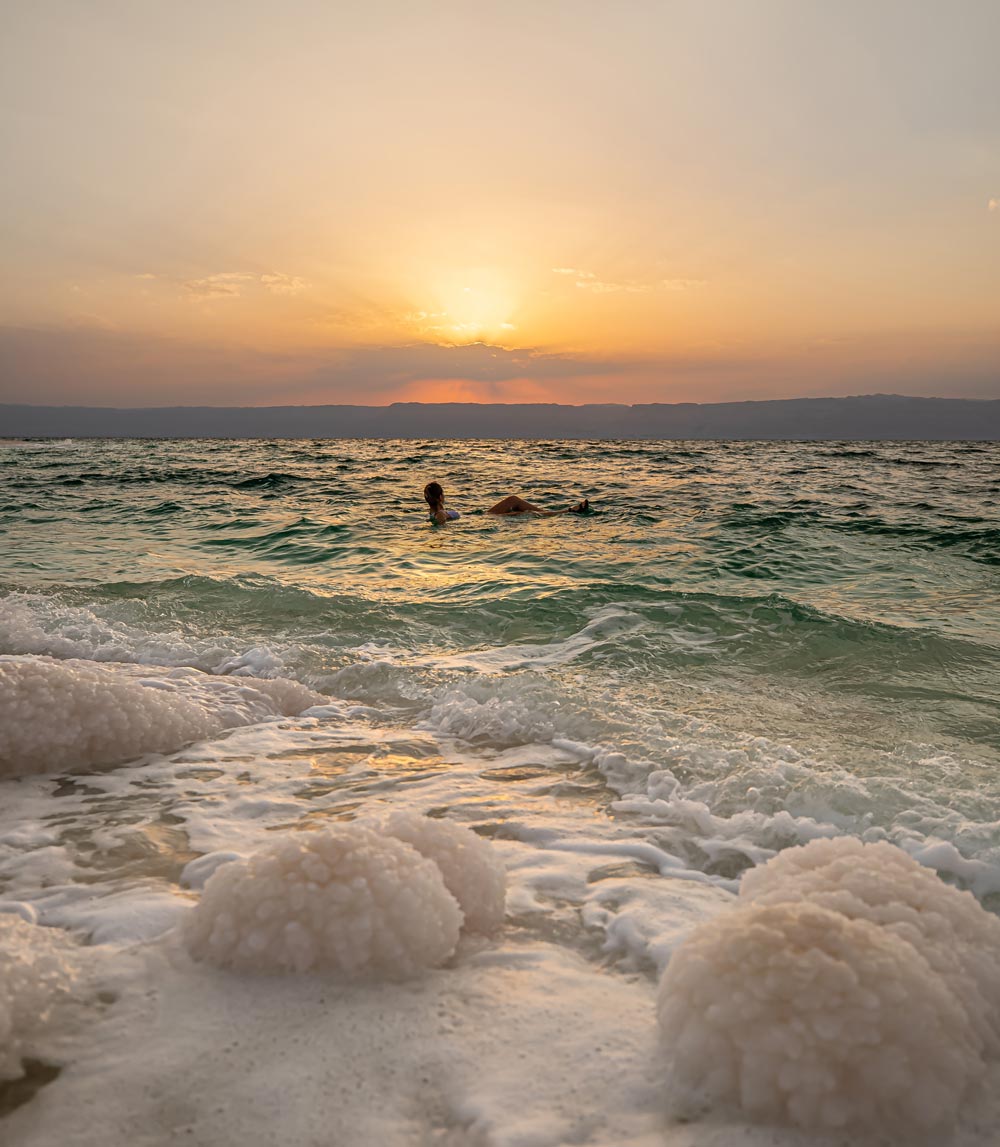 2. Float in the Dead Sea

The Dead Sea surrounds the western border of Jordan, famous for its healing powers and unique topography. It’s officially the lowest point on earth, at about 430 m (1,412 ft) below sea level and a 1-hour drive from Jordan’s capital city, Amman.

Due to the high salt content in the lake, you’re able to float in the water with no effort. It’s such a surreal feeling and definitely a once-in-a-lifetime bucket list experience. Ladies (and gents who shave), please avoid shaving your bikini line or legs before your visit to The Dead Sea otherwise your fanny will be stinging from the salt. Don’t say I didn’t warn you!

3. Sleep under the stars in a bubble tent

Sleep under the Milky Way in a bubble tent within the Wadi Rum desert at one of the many camps located in the area. With virtually zero light pollution, an overnight stay in the Wadi Rum is the perfect spot for star gazing where you can get a clear view of constellations, galaxies and satellites.

You’ll forget all about the rest of the world and start to believe you’ve woken up on another planet (or the movie set for Dune). There are dozens of camps to choose from, however, I highly recommend staying at Memories Aicha Camp for a luxury glamping experience. 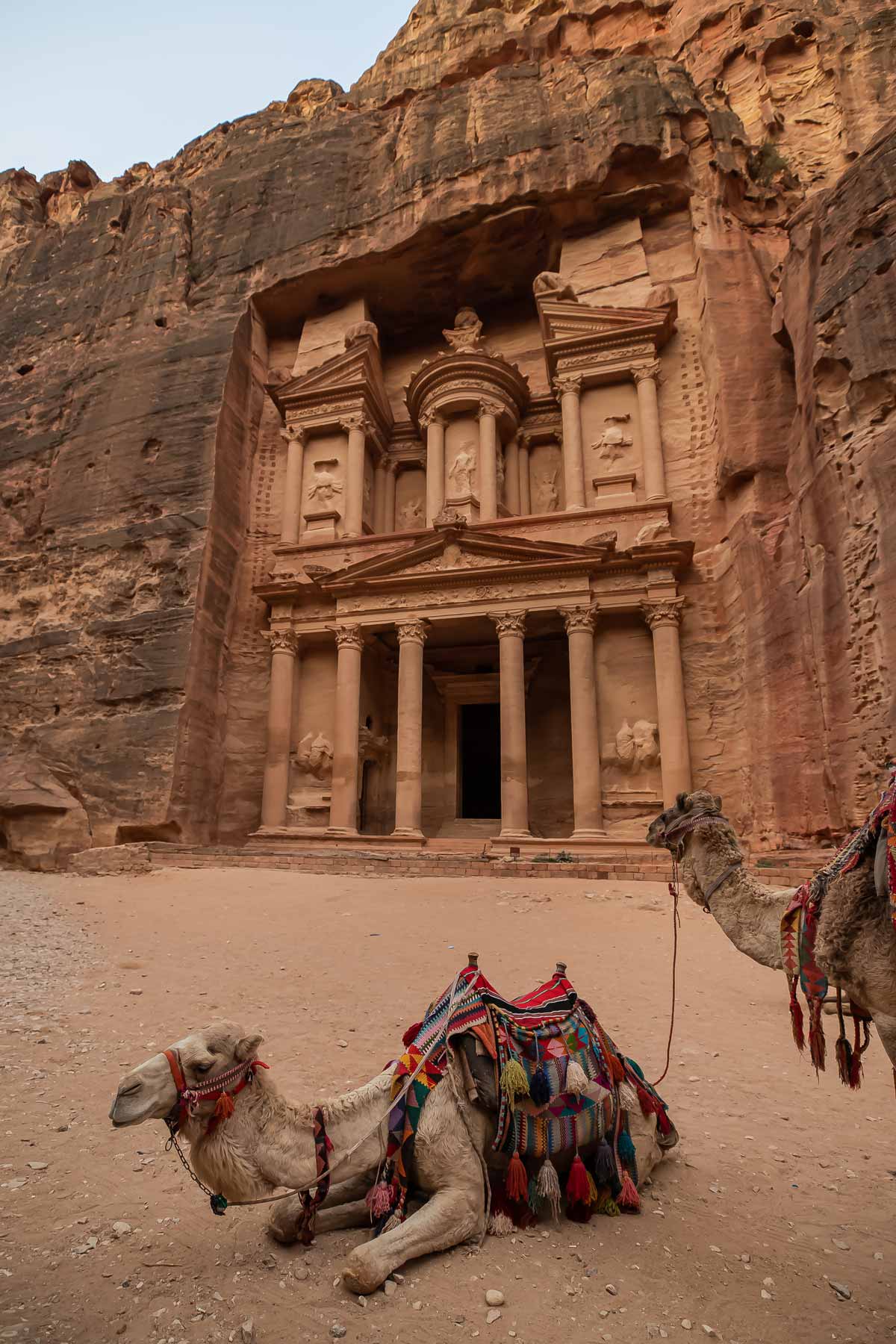 4. Visit the ancient city of Petra

The Ancient city of Petra was once the trading centre and capital of the Nabataean empire who settled in Jordan over 2000 years ago. Petra is a UNESCO World Heritage Site and one of the new Seven Wonders of World. The site was lost to the western world for hundreds of years, sitting empty and in ruins until the 1800s when it was rediscovered and excavated by archaeologists. Only 15% of Petra has been uncovered, with the remaining 85% of the city remaining underground and untouched.

From the entrance of the site, you walk through a 1 km long narrow chasm (or siq) which dramatically opens up to the famous monument, Al-Khazneh (The Treasury). This famous tomb for King Aretas III which was carved into the rock face by the Nabataeans, who settled in Jordan 2000 years ago.

Petra is filled with hundreds of archaeological wonders and Hellenistic architecture including temples, streets, Roman-style theatres, tombs and baths. Further into the site, after climbing 900 rock-cut steps you will come across the impressive Ad-Deir Monastery.

– Tickets cost 50JD (£53) for 1 day or 55JD for 2 days.
– I recommend at least 2 days to see Petra, 1 day is possible but you will be EXHAUSTED.
– Wear comfortable trainers that you can climb in, you will be walking/climbing a LOT!
– Bring cash with you & some loo roll/tissue.
– There are restaurants, toilets and plenty of places to get food & drink within the Petra site.
– Don’t ride the donkeys/camels.
– Don’t climb without a Bedouin guide.
– Don’t lean on or enter any tombs. 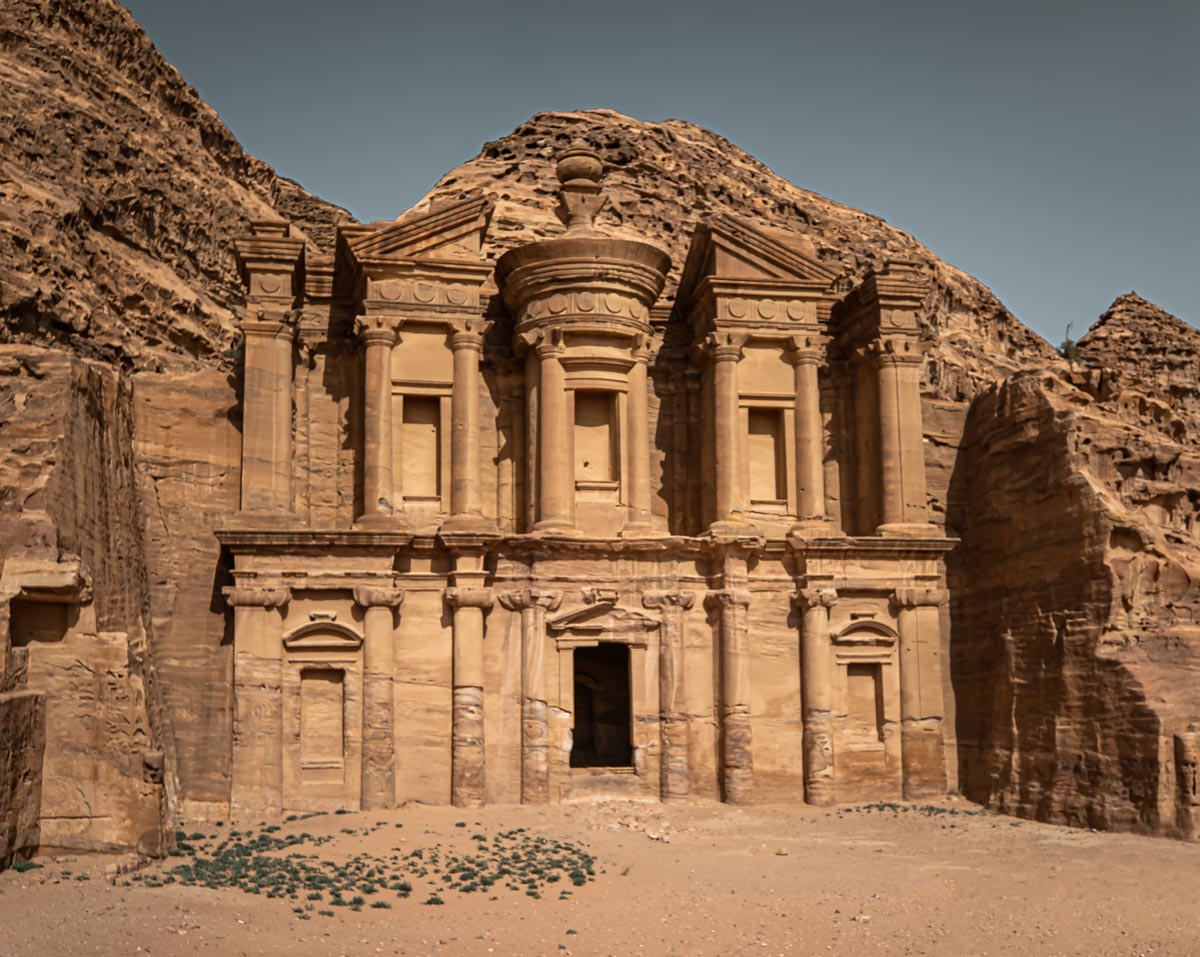 In 1985, a group of Bedouin women from the Bani Hamida group started a weaving project to empower local women to build a career and generate income for their children and community. Together these women produce intricate rugs and crafts woven on traditional ground looms.

You can visit their artisan studio in the mountains overlooking the Dead Sea and witness the highly skilled women while at work. You’ll learn about their weaving process, using traditional Bedouin techniques passed to them from their mothers and grandmothers. You’ll also get the opportunity to eat and drink local food prepared by the Bedouin women and hear their stories. 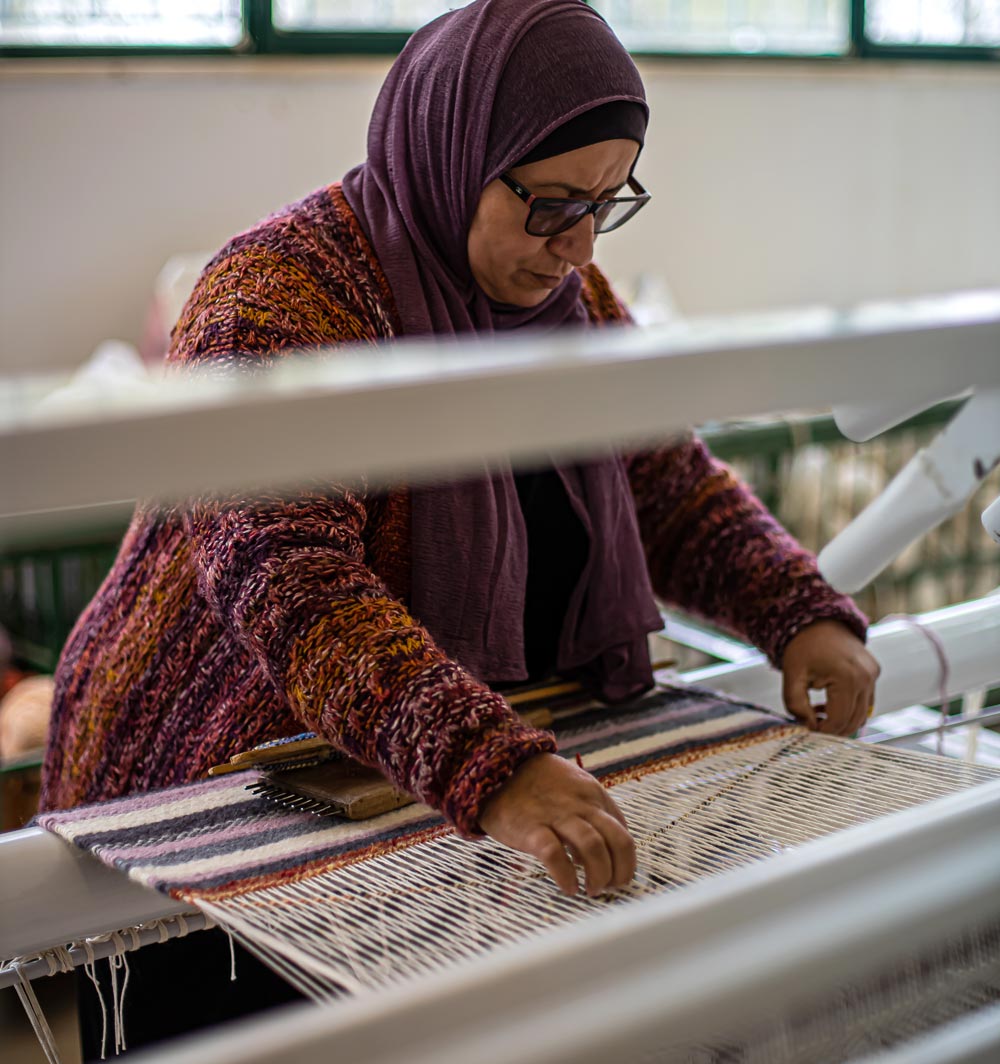 6. Have tea with the Bedouin

The local Bedouin people are the ancient population of Jordan. The word Bedouin comes from the Arabic badawī, meaning “desert dweller“. These nomadic people have lived in the desert for thousands of years and today there are 4 million Bedouin living in Jordan. You’ll get an invitation “Tashrab shay?” to drink tea with the Bedouin when visiting Petra or staying in the Wadi Rum. Drinking Bedouin tea actually helps lower your body temperature in hot weather as well as boosting your metabolism and helping fight infections.

7. Soak in the Ma’in Hot Springs

Tucked in the Far East corner of the Dead Sea lies a tranquil oasis – Hammamat Ma’in. These thermal mineral hot springs are a 60-minute scenic drive from Amman airport. The springs are 264 meters (866 feet) below sea level. The water temperature ranges from 45°C – 60°C.

There are 4 waterfalls available for the public and 2 waterfalls accessible for guests staying in the Ma’in Hot Springs resort – however, I would avoid staying at this resort as we did not have a pleasant experience. The waterfalls are open daily 9 am – 9 pm and there is a ladies-only waterfall with its own private changing room. 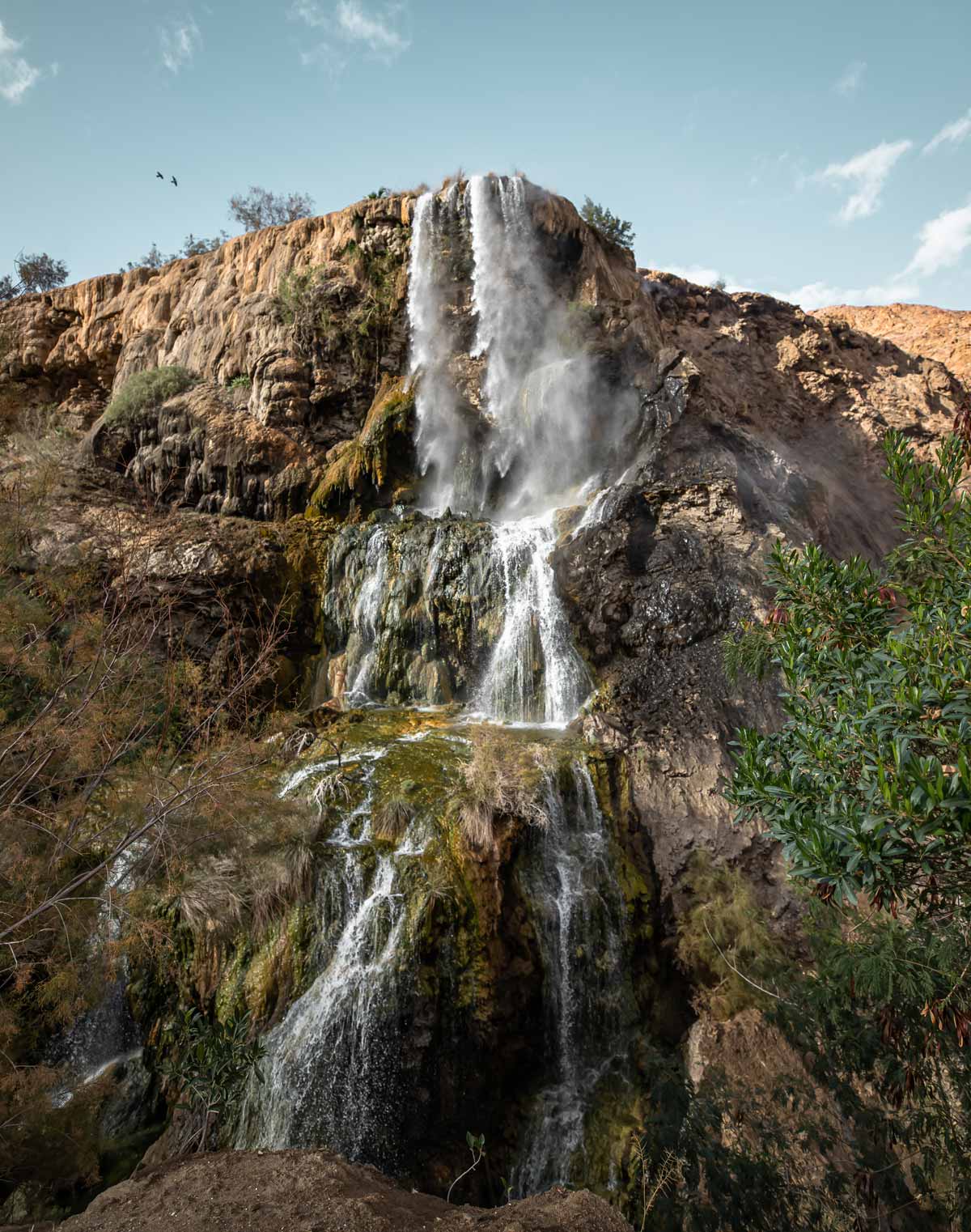 8. Explore Aqaba and swim in the Red Sea

Unlike the Mars-like desert landscapes of the Wadi Rum, Aqaba is a port city providing a contrasting change of scenery. Located on the Red Sea, it’s well worth a visit for its wonderful beaches, stunning waterfront promenade and 16th-century castles. After trekking around Petra, you’ll definitely appreciate a day or two spent sunbathing or coral reef diving in the clear waters.

A magical evening in the ancient city by candlelight. See the iconic Treasury illuminated by hundreds of candles and lanterns while a Bedouin plays a shepherd’s flute and recites old tales of the Nabatean times. It’s a spiritual journey you won’t want to miss. Petra by Night runs every Monday, Wednesday and Thursday from 8.30 pm. 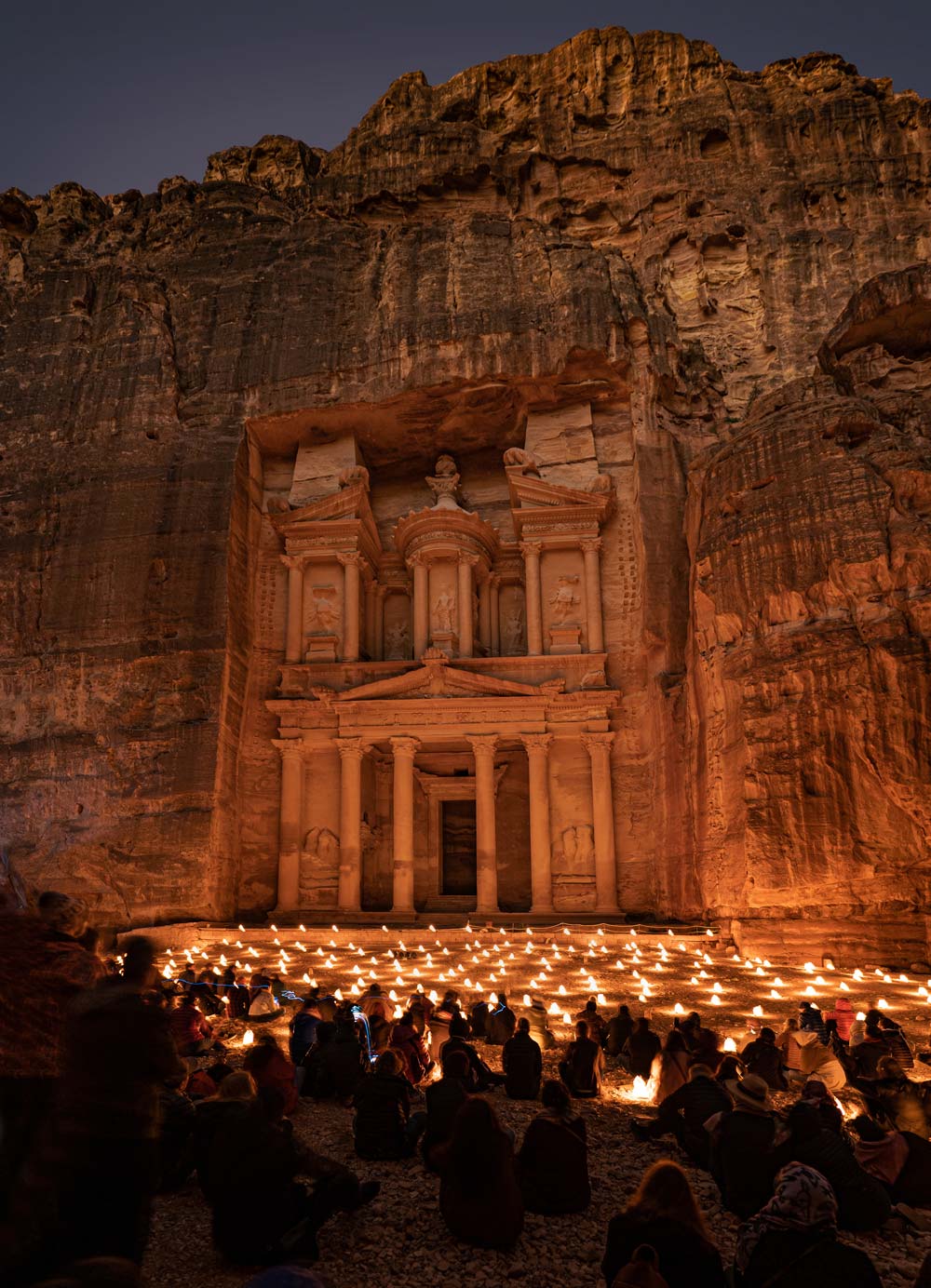 Where to stay in Jordan

Beautiful 5-star resort located on the shores of the Red Sea in Aqaba. All rooms have a private balcony and the beach is within a 5-minute walk. Rooms start from £147/night with rates including dinner & breakfast.

A luxurious desert camp located in Wadi Rum, Jordan. These ornate tents/domes start from £150/night with rates including dinner & breakfast. On-site there is an impressive cafe carved into the side of a sandstone mountain. 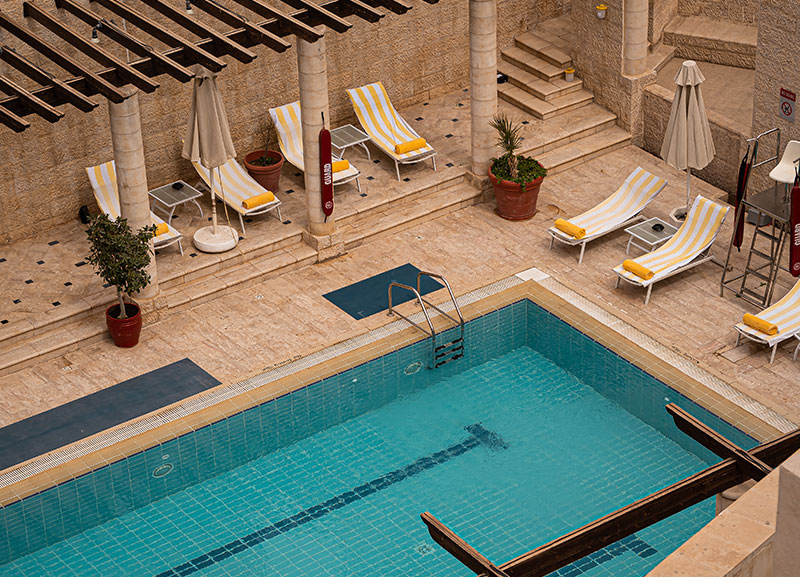 This stunning 5-star hotel is located only a 3-minute walk from the Petra site entrance. Guests can enjoy free Wi-Fi and a refreshing dip in the outdoor swimming pool. Rates include breakfast & dinner. 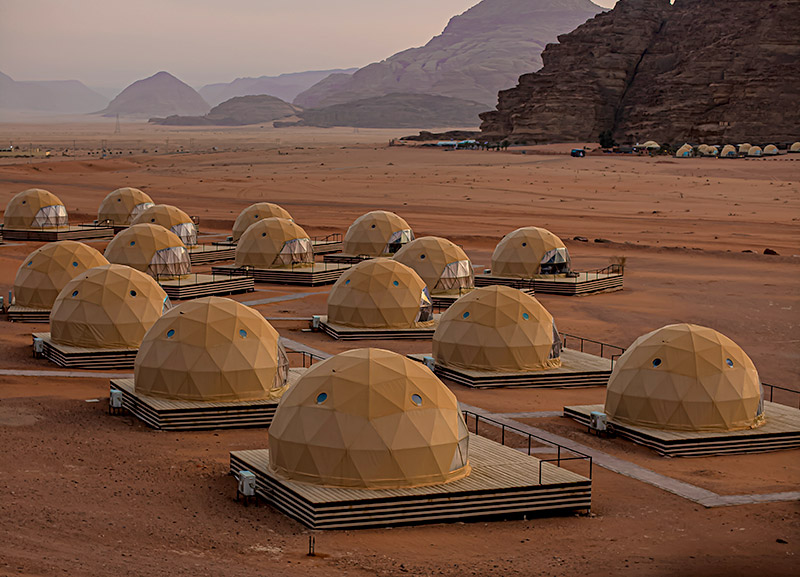 Sleep under the Milky Way at this Wadi Rum desert camp in either a Martian dome or a traditional Bedouin tent. Rooms start from £96/night with rates including dinner & breakfast.

Jordanian cuisine typically consists of mezze-style food like rice, falafel, yoghurt, lamb, olives, and bread. Local dishes are influenced by North African, Persian, Mediterranean, and Middle Eastern food. If you’ve got a sweet tooth, you’ll find plenty of sweet pastries like Baklava and Knafeh (pastry filled with cream cheese, sugar & rose water). One of the most popular local dishes is Mansaf which is a lamb dish cooked in fermented yoghurt.

Alcohol is legal and you can order alcoholic drinks at most hotels. Limonana is one of the most popular local drinks – a mint lemonade – which is both sweet & sour and the perfect way to cool down. While in Jordan, you can’t miss trying the local Bedouin tea.

When to visit Jordan

The best times to visit Jordan are in Spring (March-May) or Autumn (September-November). During these months it’s mostly sunny and between 20-28ºC/68°F-82°F. Outside of these months and it is absolutely SCORCHING. With plenty of exploring to do, you’ll want to plan your trip for the slightly cooler months.

How long to stay in Jordan

7 days is the ideal amount of time to see the best that Jordan has to offer. I recommend dedicating at least two full days for visiting Petra. 2 days in the Wadi Rum, 1 day in Aqaba, 1 day in the Dead Sea and 1 day in Amman.

Getting to & around Jordan

When visiting Jordan, most visitors fly into Amman, the capital city. Alternatively, you could fly into the coastal city of Aqaba on the Red Sea’s Gulf. Here you will find lots of beach resorts, coral reef diving and water sports. It’s also close to Wadi Rum. From there you can work your way up north, stopping at the Dead Sea and fly out from Amman. Jordan is a 5-hour direct flight from London.

In terms of getting around Jordan, your best bet is to hire private transfers. Public transport buses are available between destinations however you’ll have to account for long wait times as there are no timetables and buses will only depart when they are full. Of course, you can hire a rental car however I only recommend doing this if you are a confident driver. The benefit of a private driver is they will know all the backroads and you can keep to your schedule.

Other useful tips for Jordan

The local language is Arabic. Most Jordanians I met on my trip spoke English and were very friendly and had plenty of banter! However, it’s both polite and useful to learn these common phrases:

It’s really a no-brainer as it’s incredibly cost effective. The cost of your tourist entry visa is included within the Jordan Pass as well as entry to Petra, Jerash, Wadi Rum and over 40 tourist attractions. The pass costs 70 JD (£80).

What to Wear in Jordan

As Jordan is a mostly religious Muslim country, it’s recommended that women cover their shoulders, arms and legs and men should avoid wearing shorts, especially in areas such as Petra. In hotels & resorts by the sea, you can dress more liberal and wear bikinis when swimming. When in doubt, pack a lightweight shawl/scarf with you that you can easily drape across your shoulders 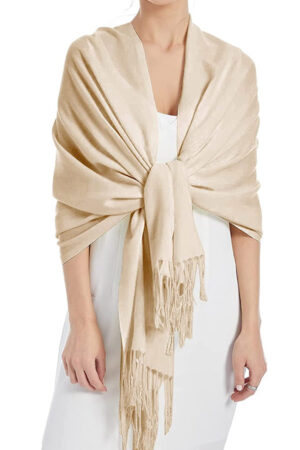 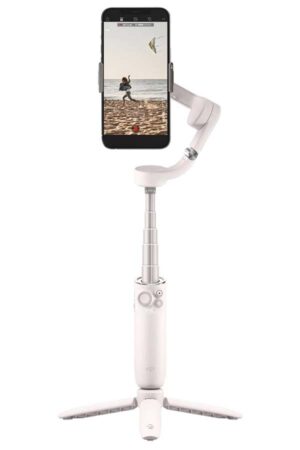 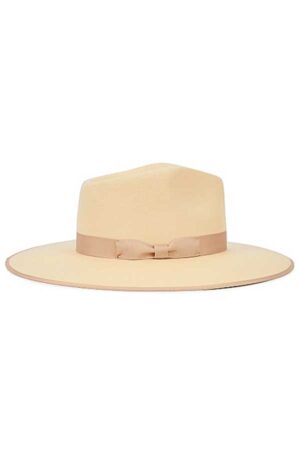 Here’s my map of Jordan with all the recommendations mentioned in this post (with a few extras added!). 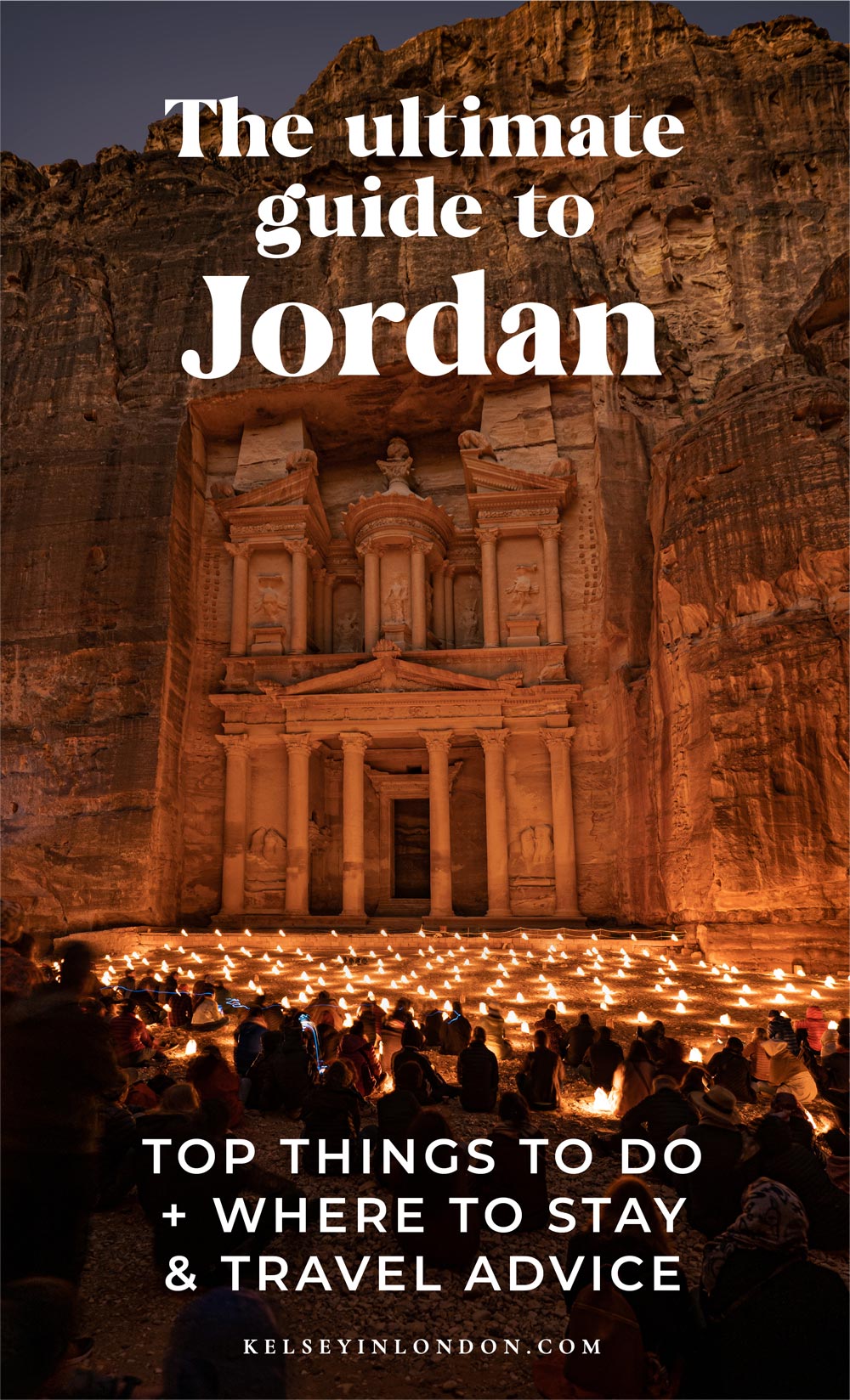 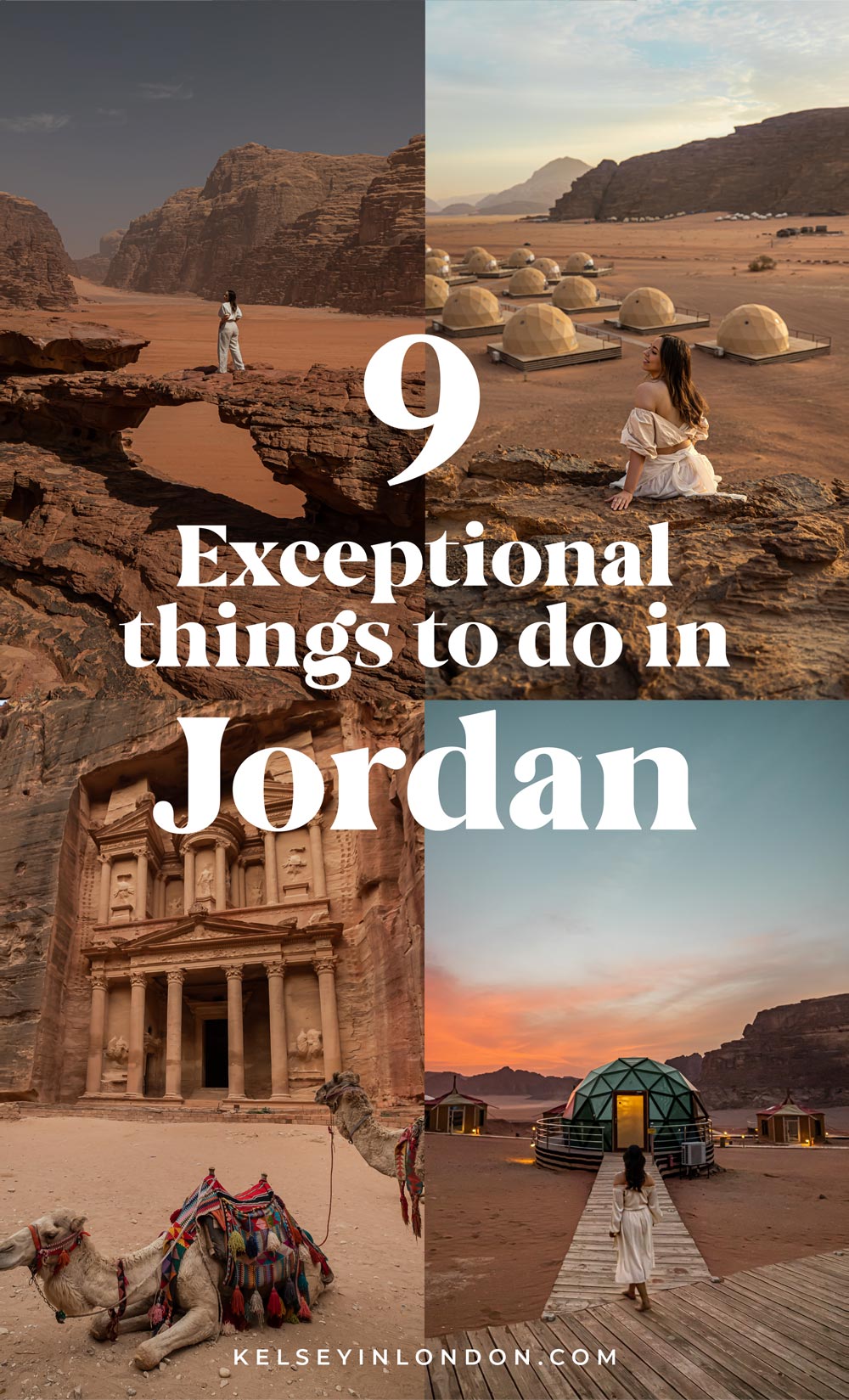 Tickets are £14.85 or £23.85 with a glass of Nyetimber Classic Cuvée. Note: Tickets are considerably cheaper when you book online.

The Polish eat more soup than any other country in the world, 3.8 BILLION litres of soup each year to be exact! That’s 103 litres of soup per person.

Tickets are £14.85 or £23.85 with a glass of Nyetimber Classic Cuvée. Note: Tickets are considerably cheaper when you book online.

We use cookies to ensure that we give you the best experience on our website. If you continue to use this site we will assume that you are happy with it.Ok